Euroconsult, a leading international research and analyst firm specialized in the satellite and broadcasting sectors, has announced that growth in the satellite pay-TV market remained strong in 2009, despite the global economic downturn.  According to the just released 4th edition of “Satellite TV Platforms, World Survey & Prospects to 2019, Growth through the Crisis”, the number of TV Platforms in service increased to 113 in 2009 (+38 percent in three years). Pay TV platforms combined currently reach 131 million subscribers and earned $70 billion revenues in 2009. 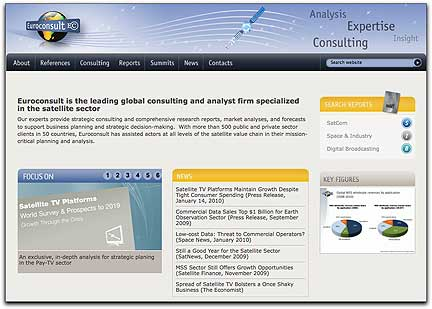 Report info...
“Subscriber growth in the satellite pay-TV market has been robust, increasing 15 percent worldwide,” indicated Pacôme Revillon, CEO of Euroconsult. “Growth in emerging digital markets has been particularly strong with subscribers reaching the 60 million mark in 2009, a nearly five-fold increase over the previous few years” he added.  ”Looking forward, the market is expected to remain bright with Euroconsult forecasting roughly 235 million subscribers worldwide by 2019.”

Nearly all markets, with the exception of Europe, saw revenue growth in local currency last year. However, more aggressive pricing strategies, both due to the crisis and to more intense competition, weighed down the average revenue per subscriber (ARPU), resulting in revenues growing more modestly than subscribers. While the aggressive pricing strategy currently practiced by many platforms drives subscriptions more than revenues in the short term, fee increases — which are very likely over time — should help securing long term revenue growth. This commonly-used strategy enabled platforms like Russia’s Tricolor TV to sign close to three million subscribers in only three years of operation with a basic package at around one dollar per month. Meanwhile, its rival NTV+ is still striving to reach the one million subscriber mark after more than a decade.

Euroconsult expects the outlook for satellite pay-TV to remain positive and continuous growth is expected into the next decade, with an estimated 240 million subscribers worldwide by 2019. This growth will mainly come from emerging digital markets, in particular India, Russia, and Brazil as satellite pay-TV platforms multiply in those markets and affordable offerings increase uptake. Emerging digital markets should represent close to 70 percent of total subscriptions worldwide by 2019 compared to 45 percent in 2009. However, the growing number of national markets served by multiple platforms (i.e., seven platforms in Russia) and difficulties anticipated to reach profitability due to the slowing pace of subscriptions, will likely lead to consolidation in the next three to four years in certain markets. Vertical integration could also continue in both emerging and developed markets, driven by telecom operators’ investments in the content distribution business. For further information on this in-depth analysis, select the graphic above.