Taking its next major step toward offering global coverage of the mini-VSAT Broadband service, KVH Industries, Inc., (Nasdaq: KVHI) has signed a multi-year agreement with SKY Perfect JSAT Corporation (also known as SP-JSAT) to lease satellite capacity on its JCSAT-1B and the new Intelsat-15 satellites. 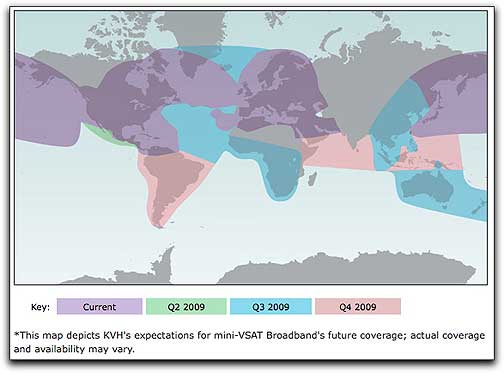 These satellites will provide mini-VSAT Broadband service coverage in Asia Pacific waters and in the Indian Ocean, respectively, starting late in the third quarter of 2009 and early in 2010, respectively. In addition, the companies will pursue hardware and mini-VSAT Broadband airtime sales in the Asia Pacific maritime market with SP-JSAT granted exclusive rights for sales to Japanese-flagged and Japanese-owned vessels while KVH will focus on all other vessels in the region. With the activation of mini-VSAT Broadband in Asian waters and in the Indian Ocean, commercial and leisure vessels will be able to circumnavigate the globe without leaving the mini-VSAT Broadband coverage area. In addition to providing service to the KVH mini-VSAT maritime system, the KVH and ViaSat Inc. (Nasdaq: VSAT) joint effort also expands network coverage to the ViaSat Yondersm mobile network for in-flight broadband to business and commercial aircraft. The mini-VSAT Broadband service, along with the KVH TracPhone® V7 antenna, comprise the first end-to-end 24-inch VSAT hardware, service, and support package available for maritime communications. Together, KVH and ViaSat are already offering Voice over IP phone service and Internet access as fast as 512 Kbps (upload) and 2 Mbps (download) at fixed monthly rates to mariners throughout North America, the Caribbean, the North Atlantic, Europe, the Northern Pacific, and the Persian Gulf.