To learn more about this mission, access the organization's website.
[SatNews] A tiny educational satellite is set to launch on November 21, 2013, from Russia and will then send signals to Bletchley Park in the UK. 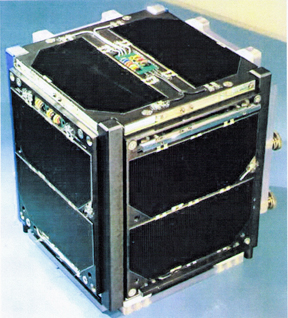 The FUNcube...
Known as FUNcube-1, this is a small “CubeSat”, which means it is less than 1kg in weight and is only 10x10x10cms overall. It is the first CubeSat with a communications transponder to have been designed, built and tested entirely by volunteer radio amateur enthusiasts anywhere in the world. They have worked in their spare time, and largely at their own expense. Most are members of AMSAT-UK, a group of like minded people, with an interest in space, technology, and radio communications. They have been driven only by their passion for communications, computer technology, and interest in space. The project has been funded only by private donations with initial support from the Radio Communications Foundation.

It is also the first such spacecraft to have, as its primary mission, educational outreach to students at schools and colleges. This outreach is intended to encourage a greater interest in the STEM (Science, Technology, Engineering & Maths) subjects which will be so important for our future prosperity.

FUNcube-1 will be launched on a Dnepr rocket, which is a converted SS18 ICBM, from a silo in the south of Russia near the town of Yasny.

A network of volunteer listening stations is being setup around the world to cover the first orbits in order to collect the vital telemetry data being transmitted from space. A temporary monitoring station is being established at the National Radio Centre which is based at the Bletchley Park, where the designers and builders of the spacecraft will assemble and listen for the signals soon after launch. The NRC is an educational facility provided by the Radio Society of Great Britain.

It is planned that, after commissioning of the spacecraft has been completed, signals will be received by schools directly using a simple USB dongle receiver and a small aerial in the playground. This receiver, known as the FUNcube Dongle, is a technically advanced, Software Defined Radio and is already a great commercial success. The radio has been designed and is being assembled in the UK—more than 15,000 of them have already been sold for other uses around the world.

AMSAT-UK has been working on this project in collaboration with their Dutch counterparts, AMSAT-NL, and has also been supported by ISIS BV in Delft.