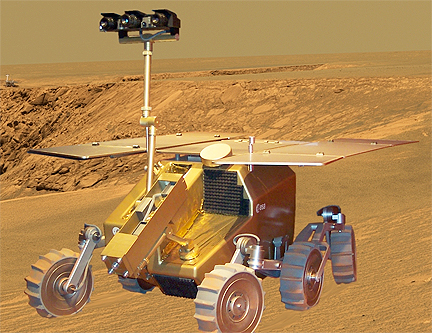 Artistic rendition of the ESA's ExoMars Rover
[SatNews] The 20-nation European Space Agency (ESA) on November 19 approved a cooperation arrangement with Russia under...

...which the Russian space agency, Roscosmos, will provide two Proton rockets to launch what has become the Euro-Russian ExoMars mission in 2016 and 2018, according to ESA officials. ESA’s ruling council approved the Russian partnership in advance of a two-day meeting of ESA government ministers during which other pieces of ExoMars’ financing were likely to be discussed. ESA is depending on Russia to save the life of ExoMars, on which ESA governments have already spent more than 400 million euros ($520 million).

Comprising a telecommunications orbiter with a NASA-provided antenna, and an entry, descent and landing module in 2016, plus an ESA-built rover for launch in 2018, ExoMars is now expected to cost ESA about 1.2 billion euros after accounting for the two Roscosmos-provided Proton launches of the two missions. Russia will provide an instrument for the 2016 telecommunications orbiter and will have principal responsibility for a landing module for the 2018 mission, in addition to providing an experiment aboard the ESA rover.

As of this writing, the agency is about 350 million euros short of what it needs to complete ExoMars. Among several potential sources of cash for the mission, ESA has said that a portion of the ESA dues paid by new members Poland and Romania might be spent on ExoMars. The agency has also said Russia’s Proton might be used to launch Europe’s Juice mission to Jupiter in 2022, saving ESA’s science program some 170 million euros. A portion of these savings would be used to take part in Russia’s Ganymede mission to Jupiter’s largest moon, with the major share covering the current ExoMars shortfall. ESA managers are also counting on their science program—which is run independently and is not subject to ESA executive edict on mission choice—to contribute 50 million euros to ExoMars in consideration of ExoMars’ scientific merit.