SkyTerra Communications... It's A Done Deal... 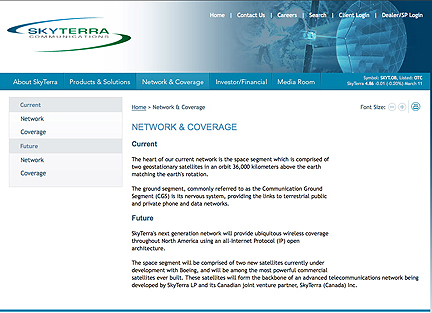 SkyTerra's website for further info...
SkyTerra Communications, Inc. (OTCBB: SKYT) has announced the completion of its acquisition by an affiliate of Harbinger Capital Partners (“Harbinger”). The take-private transaction was accomplished via merger for approximately $262.5 million in cash, or $5.00 per share, pursuant to a previously disclosed merger agreement (the “Agreement”) entered into on September 23, 2009.

The all-cash merger represents an approximately 56 percent premium over the average closing price of SkyTerra’s common stock for the 30 days ended September 22, 2009, the last day before the announcement of entry into the Agreement. After taking into account SkyTerra’s outstanding debt and securities held by Harbinger’s affiliates, the transaction represents a total enterprise value of approximately $1.849 billion. Approximately 91 percent of the outstanding shares were voted in favor of the Agreement. It was also approved by approximately 82 percent of the shares other than shares owned by Harbinger’s affiliates, any director or officer of SkyTerra and any of their respective affiliates and the Escrowed Shares (as defined in the Agreement).