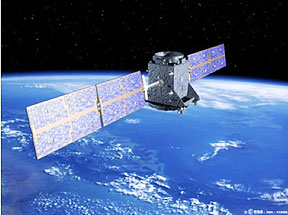 GIOVE-A satellite (artist's impression) Credits: ESA - P. Carril
Surrey Satellite Technology Ltd (SSTL) has just celebrated the 4th anniversary of the launch of its historic GIOVE-A satellite, the first step in Europe's visionary Galileo satellite navigation program, with the launch having occurred on December 28th, 2005.  During the past 4 years, SSTL and GIOVE-A have contributed significantly to the testing and validation of technologies vital to the now imminent operational constellation of satellites. The 660 kg GIOVE-A satellite was built by SSTL for ESA in just 30 months at a cost of 28 million euros.

GIOVE-A was the first part of the in-orbit validation programme for Galileo, broadcasting the first signal to successfully secure the critical Galileo frequency filing with the International Telecommunications Union (ITU) at 17:25 GMT on the 12th January 2006.  This was a significant achievement for SSTL having commissioned the necessary systems to achieve this broadcast in just three weeks. On the May 2, 2007, GIOVE-A successfully transmitted the first Galileo navigation message from space, containing the information needed by users' receivers to calculate their position using the future Galileo satellite navigation service.  These signals have since been used for signal quality testing and for equipment manufacturers and the scientific community to validate prototype Galileo receivers. Throughout the past 4 years, the satellite has provided valuable data about the Medium Earth Orbit which the Galileo constellation will occupy, helping to characterise the radiation environment and validating subsystems such as an atomic clock and the Galileo signal broadcasting payload.

In July and August this year, GIOVE-A was gradually moved to a higher orbit to ensure that it does not cross the operational Galileo constellation's orbits when the first operation satellites are launched in 2012.  The satellite has been in orbit for 21 months beyond its original 27 month mission design life and continues to provide critical data to all of the ground users experimenting with Galileo navigation signals. SSTL, together with its partner OHB-System of Bremen, Germany form the core team of one of the two consortia bidding for the operational satellites. The final proposal was delivered to ESA in November and the outcome of the evaluation process is awaited. To help improve the overall schedule the team was authorised by the EC and ESA to initiate the procurement of long lead items for the full system earlier this year.