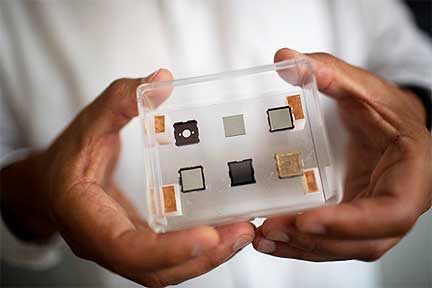 [SatNews] A penny-sized rocket thruster may soon power the smallest satellites in...

...space, as reported by Jennifer Chu of the MIT News Office. The device, designed by Paulo Lozano, an associate professor of aeronautics and astronautics at MIT, bears little resemblance to today’s bulky satellite engines, which are laden with valves, pipes and heavy propellant tanks. Instead, Lozano’s design is a flat, compact square—much like a computer chip—covered with 500 microscopic tips that, when stimulated with voltage, emit tiny beams of ions. Together, the array of spiky tips creates a small puff of charged particles that can help propel a shoebox-sized satellite forward.

“They’re so small that you can put several [thrusters] on a vehicle,” Lozano says. He adds that a small satellite outfitted with several microthrusters could “not only move to change its orbit, but do other interesting things—like turn and roll.”

Mini ion thrusters are manufactured using micro-manufacturing techniques. This image shows an example of the different parts comprising a thruster. The finalized device is at the bottom right, measuring 1cm by 1cm and 2mm in thickness. Lozano and his group in MIT’s Space Propulsion Laboratory and Microsystems Technology Laboratory presented their new thruster array at the American Institute of Aeronautics and Astronautics’ recent Joint Propulsion Conference.