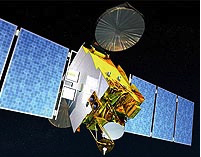 Working in close collaboration with clients, Eutelsat Communications (Euronext Paris: ETL) confirms that all services affected by the anomaly which occurred in the evening of January 27th on the W2 satellite are now fully restored at 16 degrees East. Services are running normally using capacity on three satellites collocated at 16 degrees East: EUROBIRD(TM) 16, which has been operating at this position since April 2009; W2M, which was deployed at the beginning of January to 16 degrees East in order to enter commercial service; and SESAT 1, which arrived on January 28 following the completion of its commercial mission at 36 degrees East after the entry into service of W7. In parallel to these maneuvers, W2 has been placed in secure standby mode in order for Eutelsat and the satellite's manufacturer, Thales Alenia Space, to carry out a full investigation into the anomaly.