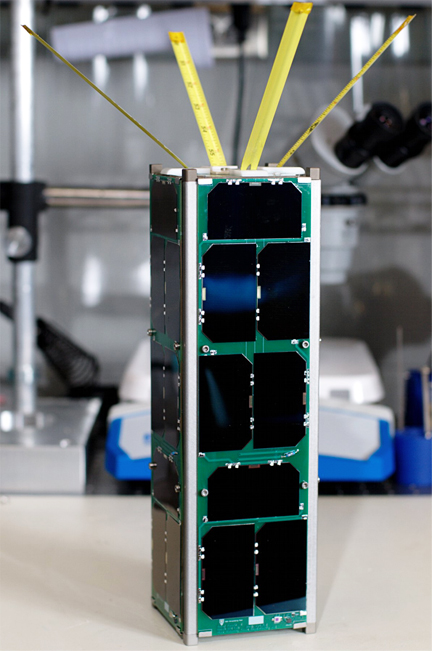 The RAX nanosatellite.
[SatNews] Researchers from SRI International and the University of Michigan have taken the first-ever measurement of...

...naturally occurring auroral turbulence recorded using a nanosatellite radar receiver. The research was done with support from the National Science Foundation (NSF) and NASA's Educational Launch of Nanosatellites (ELaNa) Initiative. The distinctive radar echoes recorded on March 8th were taken with the Radio Aurora Explorer (RAX) CubeSat. The RAX nanonsatellite measured turbulence over Fairbanks, Alaska, that was a direct result of a geomagnetic storm triggered by the largest solar flare in the past five years. The Earth's high latitude ionosphere, a region of the upper atmosphere associated with solar-driven aurora or "northern lights," becomes highly unstable when large currents flow during geomagnetic storms. RAX was specifically designed by SRI and the University of Michigan to measure this auroral turbulence from an orbital vantage point inaccessible to traditional ground-based radars.

"The recently collected radar echoes allow us to determine the root cause and to possibly predict future disturbances in the auroral ionosphere - disturbances that can severely compromise communication and GPS satellites," said Hasan Bahcivan, Ph.D., a research physicist in SRI's Center for Geospace Studies, and principal investigator of the RAX mission. A team of University of Michigan students under the direction of James Cutler, Ph.D., an assistant professor in the Aerospace Engineering Department, designed, built, and operated the satellite and gathered the radar echo data.

RAX was the first CubeSat to be selected as part of an NSF program to use small satellites for space weather and atmospheric research. The RAX CubeSat is a three liter satellite weighing three kilograms. It was launched by NASA on October 28, 2011, and has since completed 18 experiments.