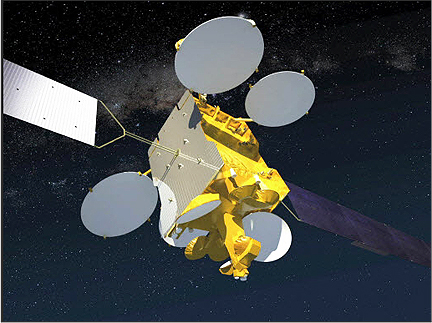 The Express AM4R, to be built for RSCC.
[SatNews] Astrium has been awarded two contracts from the...

...Russian Satellite Communications Company (RSCC) for the delivery of two telecommunication satellites, Express AM4R and Express AM7. Astrium will build the satellites based on the Eurostar E3000 platform and a Khrunichev-built Proton launcher will deliver them to orbit in 2014.

Express AM7 is a new satellite with similar design and a payload adapted to a mission at 40 degrees East to extend RSCC capacity at that position. Express AM7 will have a 62 active transponders communications payload (24 in C-, 36 in Ku-, and 2 in L-band). Both satellites will provide high performance coverage over the Russian Federation and the Commonwealth of Independent States countries and adjoining regions. They will be equipped with steerable antennas which can provide communication to any point on Earth within the satellite’s visibility. The two Eurostar E3000 satellites have nearly identical configurations, with electrical power of 16 kW and launch mass of 5,700kg. They are designed for 15-year service life in orbit. Astrium, an EADS Company, homepage link.