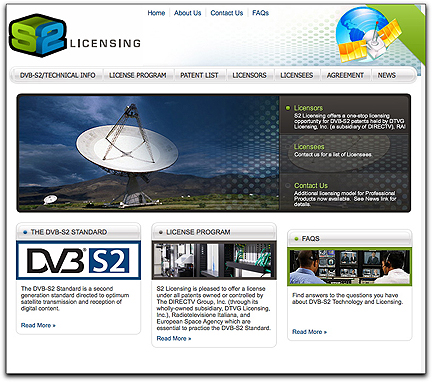 S2 Licensing has announced the Company will be present at IBC2009 in Amsterdam and all current and prospective consumers of DVB-S2 technology are invited to meet with S2 Licensing representatives during the course of the Exhibition to discuss S2 Licensing’s offering under its suite of DVB-S2 patents. For the convenience of adopters, S2 Licensing offers a license under the combined DVB-S2 patent portfolios (currently representing more than 20 patent families) of DTVG Licensing, Inc., a wholly owned subsidiary of The DIRECTV Group, Inc., the European Space Agency (ESA) and Radiotelevisione Italiana SpA (RAI). The license is available to all parties practicing or planning to practice the DVB-S2 standard, and provides favorable terms to speed adoption of the DVB-S2 standard. For consumer applications, such as satellite television STBs, a license under the combined portfolios is available for a one-time royalty of US$0.50 for each encoder or decoder present in a product for quantities exceeding 500,000 over the term of the license, and US$1.00 per encoder or decoder in lower quantities. Professional products may be licensed under any of multiple licensing models, for the convenience and at the selection of the adopter.