[SatNews] A new method by which military satellite payloads can be cooled will be tested at the ISS...

Northrop Grumman Corporation (NYSE:NOC) will use an experiment on the International Space Station (ISS) to test a new way to cool military satellite payloads. The payload, the Massive Heat Transfer Experiment (MHTEX), will be taken to the ISS on-board the space shuttle Endeavour, set to launch from Kennedy Space Center, Fla., on April 29. This shuttle mission is one of two final flights planned by NASA. "In space, it's difficult to cool electronic systems and today's methods have been stretched to their limits," said Cecilia Penera, Northrop Grumman's project manager and principal investigator for MHTEX. "The new method we are testing uses an advanced capillary pump loop that moves heat generated by electronic systems so it can be safely expelled from the spacecraft." 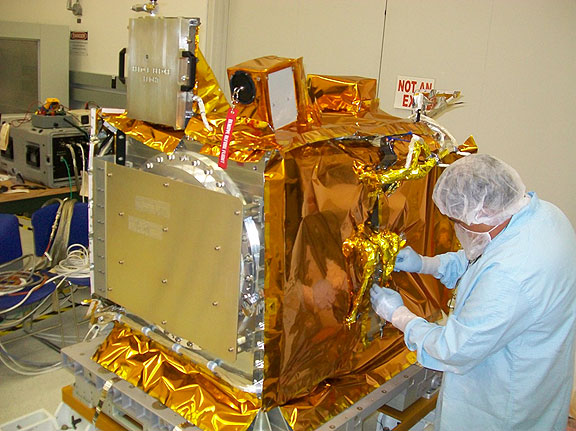 MHTEX is a collaborative effort of Northrop Grumman, the U.S. Air Force Research Laboratory's Space Vehicles Directorate and the U.S. Department of Defense Space Test Program. The experiment will demonstrate how satellite systems can be cooled eight times more efficiently than today's systems. This will allow new cooling systems to be developed that support more complex hardware on military spacecraft. "The capillary pump loop also has the capability to cool systems from multiple payloads," said Penera. "It was designed to be modular so the capillary pump loop could be scaled and reconfigured for small or large satellite power needs." By using the capillary pump loop a satellite would be able to accommodate higher power outputs or potentially more payloads. This cooling system allows for more functionality in spacecraft designs because a radiator would not need to be near equipment that generates heat.