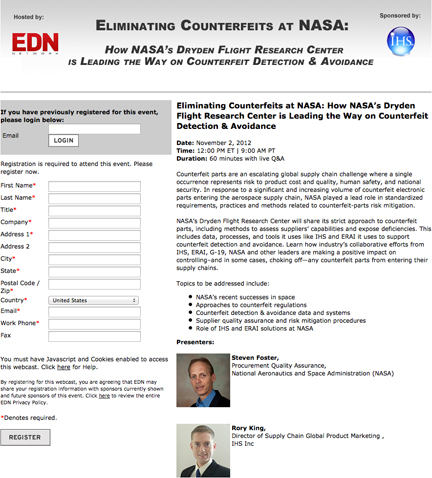 [SatNews] NASA has always confronted big challenges in outer space, from putting men on the moon, to...

...landing an SUV-sized rover on Mars, to sending a probe 5.7 billion kilometers to explore Pluto. However, back here on Earth, the storied agency now is facing what may be an even bigger challenge: The scourge of counterfeit parts, a phenomenon that threatens the success of its missions, the safety of its personnel and the security of the country.

To help combat this problem, NASA last Friday spoke at a webcast in cooperation with IHS detailing its robust approach to the counterfeit-part deluge, including methods to assess suppliers’ capabilities and expose deficiencies. Delivered by Steven Foster, head of procurement quality assurance at the Dryden Flight Research Center, the presentation covered comprehensive data, processes and tools NASA uses to support its counterfeit detection and avoidance efforts. “Our number one challenge is counterfeit parts,” Foster told an online audience of more than 500 registered attendees. “Because of this, we engage in extensive activities to mitigate risk, including working with outside organizations like IHS and ERAI.”

Counterfeiting increases and gets more sophisticated Foster noted that counterfeit parts are a growing problem and that high-risk suppliers are employing increasingly sophisticated techniques to pass off fake components. During his presentation at the event, Rory King, director of supply chain global product marketing at IHS, noted that counterfeiters have become more successful in recent years by sensing and capitalizing on supply chain vulnerabilities exposed during fluctuations in electronics supply and demand. “Counterfeiters sometimes are portrayed as simple villagers processing e-waste,” King observed. “But in reality, counterfeiters are sophisticated operators that are highly in tune with the market.”

The degree to which counterfeiters have refined their tactics is evident by correlating reported incidents of fake parts with total semiconductor fab capacity utilization. As presented in the figure attached, counterfeit incidents hit an all-time high in the second quarter of 2011, during the same period when fab utilization was peaking. “Counterfeiters track market conditions much in same way that legitimate producers of original parts do,” King noted. “When they see the market ramping up, they ratchet up their counterfeiting activities to take advantage of the tight supply situation.  They identify market opportunities and exploit them to the fullest.”

Counterfeiters also are continually developing effective techniques to defeat tests designed to detect fake parts. King noted that the problem of counterfeiting is widespread, impacting not only aerospace and defense, but all electronics and technology fields.

The costs of just a single counterfeit incident can be enormous. For instance, the Department of Defense spent $2.7 million to repair problems caused by fake parts in the THAAD missile system.  This year’s U.S. National Defense Authorization Act (NDAA) for 2012 included section 818, to address such issues by mandating improved measures for detection and avoidance of counterfeit electronic parts throughout the defense supply chain.

When discussing the NDAA and a memorandum from Frank Kendall, undersecretary of defense, urging DoD components to immediately take action to decrease the probability of counterfeit items across the department, Foster said that NASA has long since implemented several of the counterfeit detection and avoidance capabilities that defense has under consideration.

Foster showed how IHS BOM Manager, IHS CAPS Universe, and ERAI work together to manage bills of material (BOM) and individual components, while also screening them for fraudulent, high-risk, and suspect counterfeit parts. IHS Haystack and ERAI work in tandem to help vet supplier purchases for risk though high-risk supplier database analytics, including ERAI Reported Companies and Haystack access to Excluded Parties List System (EPLS).  As reported previously in the week by IHS, the number of high-risk suppliers to the U.S. government, including companies that sold suspect counterfeit product to military and commercial electronics channels, soared by 63 percent from 2002 to 2011 and included 9,539 new high-risk suppliers in 2011 alone.

IHS Haystack Gold  also enables the use of Trusted Suppliers through access to qualified lists of parts and suppliers. Haystack is a logistics management  system with parts and sourcing data for well in excess of 100 million items in the U.S. Federal Supply Catalog, and also for more than 70 U.S. Army, Navy, Air Force and related databases.

A replay of the webcast can be accessed at this direct link.