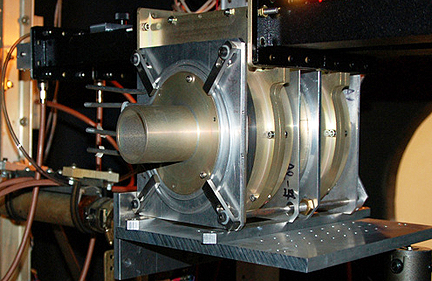 Pictured is The Elwing Company thruster.

[SatNews] The Elwing Company, through its European affiliate Elwing Europe, has announced an agreement with prominent...

OHB Sweden has been delivering spacecraft to the satellite community since 1972. Originally part of the Swedish Space Corporation, it is now a private entity. OHB Sweden was the prime contractor of SMART-1, the first ESA mission to the Moon, notable for its use of electric propulsion, and, more recently, the PRISMA project, a concept consisting of two satellites and a series of experiments in order to test formation flying and rendezvous technology in a real space mission. Gregory Ensellem, CEO of the Elwing Company, said, “We are confident that our development of advanced propulsion technologies combined with the capabilities of OHB to implement new technologies will represent a new era in the satellite industry for next-generation satellite customers.”

Mr. Alain Demairé, Head of Propulsion at OHB Sweden, added “OHB is proud to have distinguished itself as the first satellite company to partner with Elwing in the deployment of its groundbreaking technology, which demonstrates our commitment to constantly exploring new and innovative technologies.” The Elwing Company conceives, designs, develops, manufactures and markets advanced propulsion systems for satellites. Established in 2002, The Elwing Company is privately held and has offices, affiliates and subsidiaries throughout the U.S. and in Europe. It developed and holds exclusive rights on the electrodeless plasma thruster technology.