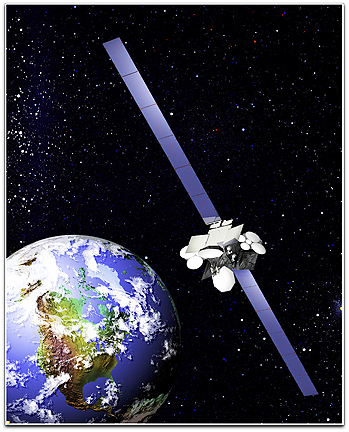 The Anik-F2 satellite, image courtesy of Boeing
Telesat has completed an agreement for a new satellite with one of its key customers, Shaw Direct. Shaw Direct, a leading provider of direct-to-home satellite television services in Canada, has agreed to use a payload on a new Telesat satellite called Anik G1.

Anik G1;s construction is planned to start in the second quarter of 2010 and then enter commercial service in the second half of 2012. The Shaw Direct payload on Anik G1 will consist of 16 national transponders operating in the extended Ku-band frequencies, all to augment Shaw Direct’s capacity and capabilities at its prime orbital location of 107.3 degrees West for the anticipated 15-year life of the satellite. In addition to the Shaw Direct capacity, Anik G1 will carry additional payloads to serve other markets. Telesat expects to announce the selected manufacturer of this new satellite in the next two to three months.