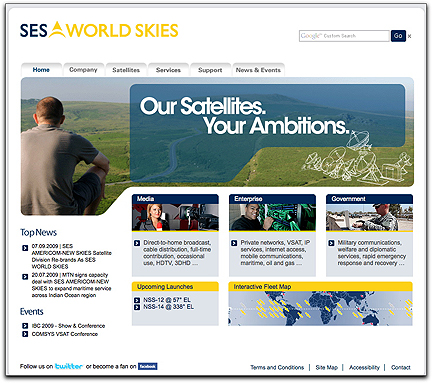 SES AMERICOM-NEW SKIES, a division of SES S.A. (Paris:SESG)(LUxX:SESG), today unveiled SES WORLD SKIES as the name for its newly integrated operation. SES WORLD SKIES has an expanding fleet of 25 satellites within the 40-satellite global SES fleet, six additional spacecraft slated for launch over the next two years, 350 employees, and more than 550 full-time customers worldwide. SES WORLD SKIES combines the strong reputation for excellence and North American presence of SES AMERICOM with the agility and global reach of SES NEW SKIES in a single, unified organization. SES WORLD SKIES’ satellites and the people and technologies behind them are enabling a world of possibilities, innovations and business platforms around the world — from the delivery of advanced HD and DTH across The Americas, Asia, Africa and other regions, to the global connectivity that is the lifeline for businesses offering enterprise, government, mobile and maritime communications services to millions of people in virtually every corner of the globe.

“With the integration of SES AMERICOM-NEW SKIES nearly complete, SES WORLD SKIES more precisely describes the reach of our evolving fleet, the depth of our expertise, and our rock solid customer commitment around the globe,” said Rob Bednarek, President and CEO of SES WORLD SKIES. “SES WORLD SKIES is a world-class, global satellite operator serving six continents, and traversing three oceans with innovative and robust solutions as diverse as our customer base.” Bednarek also noted that by leveraging SES’ financial strength, SES WORLD SKIES has initiated one of the industry’s most aggressive launch schedule and capacity expansion plans to meet the growing demand of markets everywhere. Included in these plans is the future launch of its NSS-12 satellite, which will deliver a mix of DTH, VSAT and telecom applications with coverage over Africa, the Middle East, and the Indian Ocean Region (IOR).