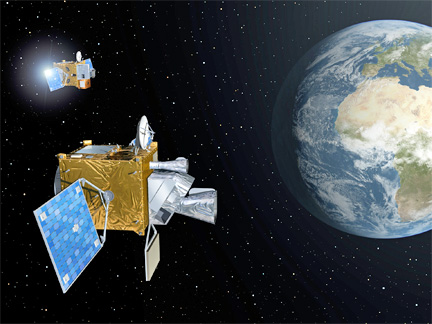 Artistic rendition of the MTG-3 satellites.

[SatNews] Astrium and OHB System AG, a subsidiary company of the European space and technology group OHB AG, have signed a contract for the delivery of propulsion systems for six Meteosat Third Generation (MTG) weather satellites.

At its Lampoldshausen (Germany) site, Astrium develops and builds chemical bi-propellant systems, and will be responsible for the delivery of the complete sub-systems: From initial design, to construction and diagnostics, through to supply, integration, and testing. A team of 40 at Astrium’s site will work on the propulsion systems with the first complete unit delivered in the first quarter of 2015.

Astrium has developed a Unified Propulsion System (UPS), which is adapted for the third generation Meteosat satellites and offers a complete pre-integrated drive system with 16 10-Newton thrusters for orbit and attitude control, and one 400-Newton apogee engine, all fuelled from two propellant tanks (925l) with hydrazine (MMH) and nitrogen tetroxide NTO). After its release from the launch rocket, the 400-Newton apogee engine will propel the satellite to its 36,000 km geostationary orbit. At this stage, the majority of the fuel, around 80 percent of the total, will have been expended. The remaining 20 percent of the fuel will serve the satellite's 16 thrusters to maintain its exact orbit path for the 13-year mission, and for any adjustments required.

Astrium, as a leading supplier of space transportation systems, has delivered complete UPS drive and propulsion systems for many other large European communication satellites; this UPS is designed for a lifespan of up to 15 years and with the highest weight efficiency. The new contract is proof of Astrium’s competitiveness, directly resulting from significant company investments and from its sustainable process improvement programme.

One aspect of note on the MTG project is the provision of the satellite structure for the integration of the UPS by Astrium. Astrium will be responsible for fitting the propellant and helium tanks, as well as the 400-Newton apogee engine and satellite structure—a central cylinder approximately three metres in height—and the 10-Newton thrusters. Astrium will then weld all the conduits, modules and tanks to the system, and carry out all the wiring and final system testing.