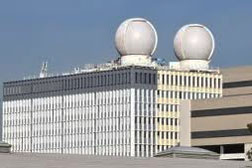 It’s a far cry from the days when Nash Rambler automobiles rolled out the front doors there. Hughes Space and Communications began building satellites in El Segundo almost as soon as the rockets to launch them became available in the early 1960s. In 2000, Hughes became part of Boeing and today the satellite business is a major part of Boeing’s Network & Space Systems portfolio.

After launching 273 satellites and space exploration vehicles, the vast majority of them successfully, Boeing’s satellite business shows no signs of middle age. In fact, over the past year, the commercial side of the satellite business has picked up steam with new contracts from Intelsat, Inmarsat and MEXSAT. The Aug. 24 anniversary event featured U.S. Rep. Janice Hahn, California State Sen. Ted Lieu, El Segundo Mayor Eric Busch, Boeing Network & Space Systems President Roger Krone, and Boeing Space & Intelligence Systems Vice President and General Manager Craig Cooning, among others. They shared the stage with an unobtrusive, two-foot-wide model of Syncom, the world’s first geosynchronous commercial communications satellite and the spacecraft that changed the world as we know it.

Nearly all the modern conveniences we take for granted every day are brought to us courtesy of satellites in orbit around the Earth. Boeing satellites have become essential to nearly every aspect of our lives — from entertainment, GPS navigation and cellular service, to weather monitoring, and government, military and commercial communications. There’s a good chance the next satellite that makes your life easier, safer and more entertaining, will be conceived of, designed and built in El Segundo.