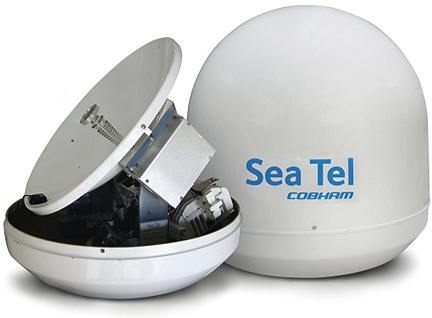 More product info...
Extensive on-satellite testing was accomplished to ensure that the USAT 24 complies with FCC ESV (Earth Stations on Vessels) regulations. The on-satellite testing was conducted on the Intelsat satellite network. Testing was accomplished on a land-based motion platform and then deployed on a 20ft. vessel to prove that no degradation in system performance occurred under the most stringent conditions that would be encountered in the Coastal maritime environment. USAT 24 is a 60 cm (24 inches), light weight, easy-to-install, stabilized antenna system for broadband connectivity in SCPC or TDMA networks. The USAT 24 is a 2-axis marine stabilized antenna system compatible with Ku-band satellites. SeaTel’s stabilization system isolates the antenna from the ship’s motion no matter how rough the weather and seas are. It has the industry leading pointing accuracy of better than 0.2◦. Unlike other similar products on the market, this pointing accuracy is extremely important to managed service providers of satellite services since it ensures no interference with adjacent satellites and more economical use of the bandwidth resources. The USAT 24 is ideal for broadband, always on services for small to mid-sized yachts in the leisure and commercial markets where available deck space is limited and close-to-shore operations do not require a larger VSAT antenna system.