SSPI—Where Will Our Industry's Leaders Come From? (Event) 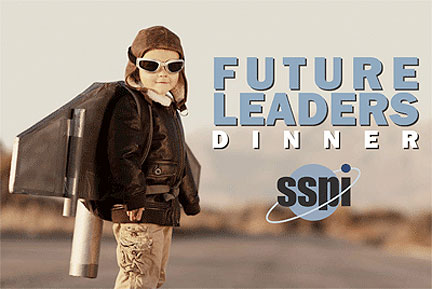 Seating and registration info here...
[SatNews] Since 2006, SSPI's Future Leaders Dinner fundraiser has honored men and women under 35 with the talent and motivation to advance into leadership positions in the satellite industry, as well as executives recognized for mentorship of the next generation.

The 2013 Promise and Mentor Award Recipients will be honored at the Future Leaders Dinner. Purchase tickets now!

The Future Leaders Dinner kicks off Satellite Week in NYC, which culminates in SATCON and the other events of Content and Communications World, including HD World and 3D World Conference & Expo. The Dinner is an intimate evening of business entertaining, where you will help celebrate the talent on which the industry's future depends. During the Future Leaders Dinner, SSPI presents the Promise and Mentor Awards. A portion of the proceeds go to SSPI's Educational Fund, which supports scholarships, internships and educational development partnerships with the university sector.

Held at The Penn Club, located at 30 West 44th Street in New York City, the Future Leaders Dinner starts at 6:00 p.m. with a cocktail reception that provides a relaxed atmosphere for mingling with colleagues, customers and members of the satellite community. Seating for dinner begins at 7:00 p.m. The gourmet dinner is followed by the presentation of the Future Leaders and Mentor awards. The Dinner ends in time for commuters to return home and visitors to continue their evening's entertainment in the Big Apple.

The keynote is: A Back and Forth Conversation between Max Haot, Founder & CEO of Livestream, and SSPI Director of Development Lou Zacharilla.

What happens when a specialist in live online coverage of sporting events decides to create the YouTube of live feeds? You get a web phenomenon with the potential to challenge the way we cover sports, news and other live events.

At the Future Leaders Dinner on November 12, join Max Haot, founder and CEO of Livestream, who has built an online community of more than 30 million viewers each month, watching thousands of live events from customers including The New York Times, Facebook, ESPN, SpaceX and Warner Brothers. For consumers, Livestream offers a $500 encoding box that lets any video camera deliver live events online with no computers required. The company’s growing professional business unit is moving upstream to drastically shrink the cost and expand the capabilities of live video, while also becoming one of the newest generation of satellite users.

Originally from Belgium, Max started his career in London at IMG in 1995 and quickly rose through the ranks at IMG's interactive division. There, he built large scale web sites for some of the largest sporting events in the world—all with real-time scoring and live video. During that time, he also became an expert in broadcast television technologies, pioneering a new video production platform while at IMG. He moved to New York in 2005 after Verizon Business acquired the video platform he had created at IMG and became a Vice President at Verizon Business, until founding Livestream in 2007. Livestream (www.livestream.com) has recently been lauded as #12 of the fastest growing private business in the U.S. by Inc Magazine and named to Forbes' Most Promising Companies in America.