Impressive, that's what Jason-2 the ocean altimetry satellite is, when less than a month after its launch the Ocean Surface Topography Mission has produced its first complete maps. The maps were calculated from the first 10 days of Jason-2’s operational orbit starting on July 4. Jason-2’s Ocean Surface Topography Mission will help monitor climate change, ocean circulation and weather. In fact, just 48 hours after the launch of Jason-2 from Vandenberg Air Force Base in California on a Delta II launcher on June 20, the first waveforms were acquired from Jason-2 and the Centre National d'Etudes Spatiales (CNES), the French space agency, processed the first Operational Geophysical Data Record (OGDR) test product. Following the calculation of the first Doppler Orbitography and Radio-positioning Integrated by Satellite (DORIS) preliminary orbits, the first Interim Geophysical Data Record (IGDR) product was processed by CNES a week after launch.

After reaching its operational orbit some 1,336 km above the Earth at a 66º inclination, Jason-2 and its experimental predecessor, Jason-1, began flying in formation some 55 seconds apart, making nearly simultaneous measurements to allow scientists to precisely calibrate Jason-2's instruments. Comparisons of the data from the two satellites show very close correlation of all measured parameters. Once it has been calibrated by the partners, the satellite will provide oceanographic products on an operational basis to the large EUMETSAT user community using the European weather satellite organization’s proven dissemination capabilities. 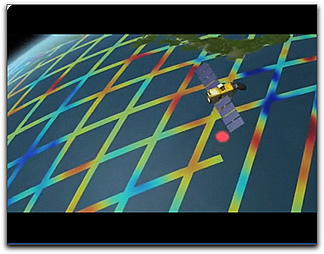 The main instrument onboard Jason-2 is the Poseidon 3 dual frequency altimeter. Jason-2 provides the much-needed data continuity which is essential when measuring the sea level trend, one of the key indicators of climate change. Of equal importance is the contribution Jason-2 will provide for meteorology and oceanography, in the area of long-term and seasonal predictions.

This is a positive example of a cooperative global effort. Jason-2 is the continuation of the existing successful cooperation between the United States and Europe with responsibilities for satellite development and launch shared between CNES and the U.S. National Aeronautics and Space Administration (NASA). CNES and the U.S. National Oceanic and Atmospheric Administration (NOAA) are responsible for satellite operations, while the Jet Propulsion Laboratory is managing the mission for NASA. Data processing is being carried out by CNES, EUMETSAT and NOAA, depending on the type of product, with EUMETSAT acting as an interface for near-real-time product distribution to European users.

EUMETSAT has successfully processed its first altimetry products following the installation of the operational version of the Jason-2 near-real-time processor. EUMETSAT is responsible for processing Jason-2 raw data received from the Usingen, Germany ground station. Every day, for seven Jason-2 passes over Usingen, the processor automatically generates products that will be used for calibration and validation activities, an operation that qualifies the data for further scientific use. Jason-2 raw data will also be acquired by NOAA at the Wallops and Fairbanks, Alaska ground stations. NOAA will generate equivalent products from the data.
Topical Tags :
Regulatory/Government
Satellite Operator
Service Provider
Regional Tags :
Global