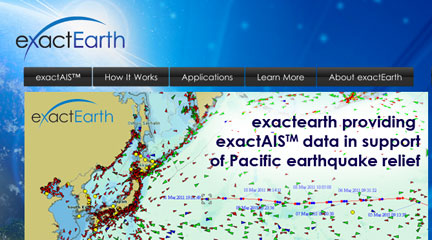 exactEarth homepage link
[SatNews] Multiple orders are always a positive and valid indication that a Company has pursued a most valid pathway...

exactEarth Ltd. has recently booked multiple orders for exactAIS™, its global vessel tracking and monitoring system. The orders, which have been placed by government agencies in several countries including principally South Africa and Japan, are in excess of CDN $2 million over the next 12 months. exactEarth also announced that the commissioning process related to its recent satellite launch is proceeding well and this advanced AIS payload will be placed into service this month as planned. In a series of tests the satellite payload, newly named exactView2, has demonstrated very good vessel detection rates in even the highest-density shipping areas of the world. exactEarth plans to add further exactView spacecraft to its constellation in the coming months.

“exactAIS is proving to be an extremely high quality data source for a range of Maritime Domain Awareness applications, and customer interest has been strong even at this early stage of the deployment of our exactView constellation,” said Peter Mabson, President of exactEarth. “With the near-term addition of exactView2 and three follow-on launches planned for later this year,we believe our service will become a critical component of any wide area maritime reporting and surveillance requirement.” exactEarth is jointly owned by COM DEV International Ltd. (TSX: CDV) and ™ß