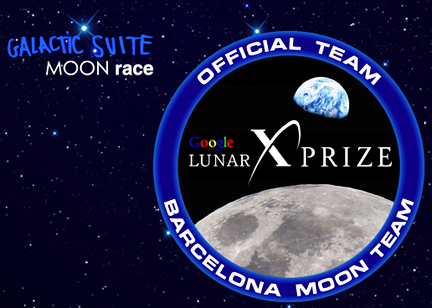 More information on the Barcelona team here...
The Barcelona Moon Team, a multidisciplinary joint venture bringing together Spanish entrepreneurial, industrial and academic expertise, announced its official entry into the Google Lunar X PRIZE — a $30 million competition that challenges space professionals and engineers from across the globe to build and launch to the moon a privately funded spacecraft capable of completing a series of exploration and transmission tasks. Barcelona Moon Team, headquartered in Barcelona, Spain, is among the 21 teams from 11 countries that are vying for their share of the $30 million prize purse.

The Barcelona Moon Team is the first Spain-based team to enter the competition and is comprised of ten companies and individuals, including several Spanish private organizations, technological centres, space professionals, and scientists. The team is led by Galactic Suite Moonrace, a filial company of Galactic Suite Design that also promotes and develops the Galactic Suite Spaceresort, the first space hotel, which intends to provide a complete experience of space tourism by combining several elements of Earth and of orbit. Other team members include: Barcelona-based technological partners, Juan de Dalmau and the Centre for Aerospace Technology (CTAE); Scientist Ignasi Casanova and his team from the Technical University of Catalonia (UPC), who support the team in the aspects of Planetary Protection and scientific payload; and Jordi Rigual, of New Output (NOP), who provides strategic and commercial support.

“We consider the prize purse to be a stimulus as the budget can be higher than $30M, but the real goal of our team is to promote, in accordance with the reality of the sector, a widening involvement of private initiative in the development of space technology and industry, including sectors such as exploration and tourism, developing steps and synergies for longer term plans for an appropriate exploitation of space,” stated Xavier Claramunt, space entrepreneur and Barcelona Moon team leader.