SSTL... Getting Out Of The Way (Satellite)

[SatNews] Surrey Satellite Technology Ltd (SSTL) has successfully repositioned the UK-DMC-1 spacecraft, which is reaching the end of its operational life, using unspent propellant to reduce the orbital lifetime and the probability of generating space debris.

Head to SSTL's homepage...
Since the first satellite, Sputnik 1, was launched in 1957, thousands of satellites, launch vehicles and probes have been sent into space. In fact, it is estimated that there are more than half a million pieces of debris larger than a centimetre currently orbiting the Earth and the problem can only grow as existing satellites age and more are launched. NASA has replaced windows on the space shuttle and the International Space Station (ISS) has been repositioned after a near-miss event. Even the smallest object, such as a bolt or a speck of paint can cause critical damage to a spacecraft when travelling at speeds of up to 25,000 mph and the practice of predicting potential collisions and manoeuvring to avoid them is increasing within the satellite community. 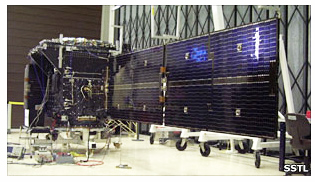 UK-DMC-1’s manoeuvres were designed to deplete the remaining butane from the propellant tanks in the spirit of industry best practice regarding orbital debris. Depletion of the propellant ensures that there are no on-board pressure sources which could cause the spacecraft to break-up and increase the space debris population. These manoeuvres have also brought the satellite closer to Earth, and thereby reduced the time until atmospheric re-entry by more than 100 years reducing the probability of orbital collisions in the future. From its operational headquarters in Guildford, UK, SSTL’s Spacecraft Operations team executed a series of precisely planned manoeuvres during a 2 week period in September. The spacecraft's perigee (the closest point to the Earth during its orbit) was reduced from the operational altitude of 675.4km to 596.9km.

Since its launch in September 2003, the SSTL-built satellite has achieved all of its mission objectives and remains in good condition well beyond its design life of 5 years and is still acquiring images for SSTL’s remote sensing subsidiary DMCii. UK-DMC-1 was part of the Disaster Monitoring Constellation and carries a first generation medium resolution 32m Ground Sample Distance (GSD) multi-spectral imager. When launched, the 89kg spacecraft carried a small butane propulsion system which contained 2.35kg of propellant, the primary function of which was to perform orbit maintenance and constellation management. When the spacecraft was no longer required to be maintained in the constellation, all of the remaining propellant was then used to perform the orbit lowering manoeuvres.