SATMEX's exciting future includes the launch of at least two new satellites, Satmex 8 and Satmex 7. This follows a successful financial and operational restructuring including Board and management changes. As part of his keynote comments during last week's SATCON 2012, Patricio Northland, SATMEX's President and CEO, stated SATMEX has undergone important changes resulting in unprecedented success. The announcement of its new brand image, "SATMEX Reaching Higher," is more than simply a facelift, as it entails redefining itself to address and capitalize on the demand for satellite communications services throughout the Americas. "After many years in the industry, SATMEX is re-launching its brand with a clear customer driven strategy and the ability to deliver state-of-the-art communication services." 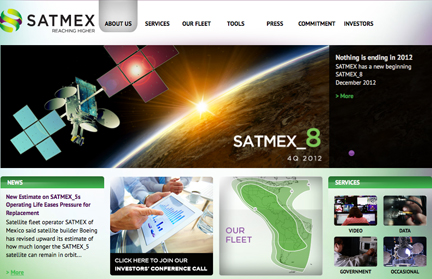 Northland stressed the pioneering role SATMEX has embraced since its foundation, in the development and deployment of leading edge satellite technologies. "We will be launching SATMEX 8 shortly, one of the most advanced commercial communications satellites in its category. This new 64-transponder satellite not only represents a new technological advantage for us, but also the chance to increase our signal coverage and transponder capacity."

Additionally, the company is currently developing, SATMEX 7, a next generation electric powered satellite which will be launched into orbit using Space-X's latest generation launch vehicle, the Falcon 9. SATMEX is proud of its strategic partnership with ABS (Asia Broadcast Satellite), Boeing and SpaceX for the construction and deployment of its new generation satellites.