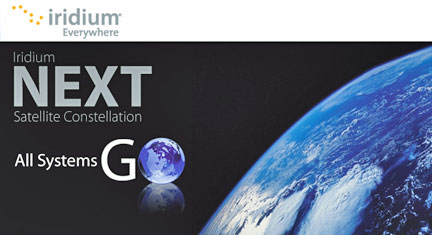 [SatNews] Iridium Communications Inc. (Nasdaq:IRDM) has signed an agreement with...

....Harris Corporation (NYSE:HRS) to enable the use of expanded hosted payload space on the Iridium NEXT platform, Iridium's second-generation satellite constellation that is scheduled for launch beginning in early 2015. The agreement provides for "hosting fees" for Iridium NEXT resources that will be used when launched into orbit on Iridium's new satellites, further extending the ongoing partnership between the two companies. The amount of hosting fees could be up to $45 million depending on Harris securing contracts with customers, and on the final configuration and resources used. The total amount won't be finalized until all payloads are launched on Iridium NEXT, scheduled to be complete in 2017.

The hosting fees will be paid to Iridium over the next four years as the Iridium NEXT constellation is built and launched. The agreement also allows for data service fees to Iridium to provide data transport and payload management services each year their payloads are operational during Iridium NEXT's lifetime, which could be to 2030 or beyond. Iridium also expects to generate additional incremental revenues beyond Aireon and the Harris payload as other capabilities of the Iridium NEXT platform are utilized.

"This is another important milestone for Iridium as we complete our vision for hosted payloads on Iridium NEXT. It realizes a once-in-a-generation opportunity to share our unique network with other customers and applications while we renew and expand our communications services for the future," said Matt Desch, CEO, Iridium. "Finalizing this agreement deepens our relationship with Harris, who has been a fantastic technology partner for Aireon, and allows Harris to support other applications for their customers at a fraction of the cost of what they would have to pay to develop and launch independently. This opportunity reinforces the power of the Iridium® network and is a testament to our continued vision for added capabilities on Iridium NEXT beyond our core mission."

In June 2012, Iridium announced the creation of Aireon LLC, a joint-venture with NAV CANADA to fly a unique payload on the Iridium NEXT constellation that will track commercial aircraft and provide that information in near-real time to air traffic controllers. Harris was selected by Aireon to supply the payload, and is building 81 payloads that will be integrated with Iridium's new satellites to receive the "ADS-B" position signals from aircraft, including those over the world's oceans, poles, and remote regions where there is currently no surveillance of aircraft. After finalizing the requirements for the Aireon(SM) system, additional hosted payload space remained available to support the other missions that Harris will now utilize.

With this agreement, Iridium has enabled full utilization of the hosted payload resources it made available to the industry when it specified the Iridium NEXT system in 2007. Iridium NEXT consists of 66 operational satellites, plus six in-orbit spares, and nine ground spares that are scheduled to completely replace Iridium's current network by 2017. Iridium created the specifications and interfaces for one or more hosted payloads to provide a platform for other applications to "piggyback" on Iridium's new satellites as they are launched into space.

There has been considerable interest from public and private entities who recognized the benefit in placing Earth and space observational sensors, communications packages, and other unique payloads on a low-Earth orbiting system operating only 780km above Earth, with interconnected satellites minimizing the need for ground stations around the world. In addition, hosting alternative payloads has created a new business opportunity for Iridium that will likely generate significant new data service revenues over the life of Iridium NEXT.