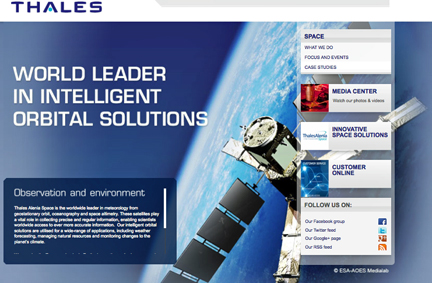 ...signed an Agreement for the creation of a Joint Venture for their two companies. The signature took place in Moscow in a ceremony attended by leading authorities from France and Russia, including presidents François Hollande and Vladimir Putin, Vladimir Popovkin, head of the Federal space agency (Roskosmos), and Jean de Gliniasty, French ambassador to Russia.

The new company, incorporated under Russian law and with ISS holding a majority stake, will be based in Krasnoyarsk, Russia. It marks the first phase of the bilateral collaboration targeted by the Memorandum of Understanding signed by the two companies in November 2011, during the French-Russian intergovernmental conference in Moscow. The jointly-owned company will initially focus on the production of equipment meeting the most demanding international standards for use on Russian telecommunications satellites. It will then work on the development of new products for satellites, enabling it to more completely address the requirements of both Russian and international markets in the future, where ISS, in collaboration with Thales Alenia Space, has already won several business opportunities.