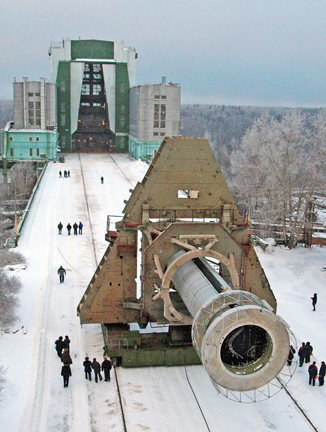 Russian Angara launch vehicle en route to a test platform.
[SatNews] Russia has started testing the use of nuclear fuel in...

...space rocket boosters, according to the Skolkovo Innovation Center, Russia's "Silicon Valley". "The project has been in full swing, with several types of fuel being tested," Denis Kovalevich, head of the nuclear technologies cluster of the Skolkovo Foundation, told the Interfax news agency. The use of nuclear fuel was aimed at interplanetary travel and work was on schedule, he added.

He said a fully Russian-designed nuclear-powered engine was expected to be tested in 2014 and should be completely ready by 2017. Russia's space agency, Roscosmos, which initiated the project, has allocated some 805 million rubles (about 27 million U.S. dollars) for the work, Kovalevich said, adding that the nuclear-powered engine was designed to have a three-year service life with no refuelling and would be used in space vehicles launched by Russia's Proton and Angara rocket carriers. (Source: Xinhua News)