[SatNews] When devastation initially occurs, it is difficult for even the most optimistic person to imagine the healing...

Footage from NASA’s Landsat satellites shows a unique overhead view of the infamous Mount St. Helens volcano. The time-lapse sequence documents the immense scale of destruction and the remarkable recovery in the three decades following the 1980 eruption. Collected by four different satellites, these images document the volcano and surrounding forest beginning just before the eruption. (Vegetation is shown as red in the first few images.) 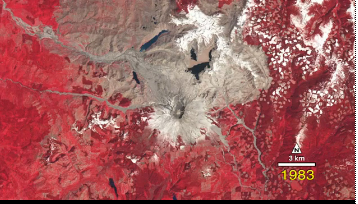 Prior to 1980, Mount St. Helens was just one of 18 volcanoes along the Cascadian Volcanic Arc, which stretches from southern British Columbia to northern California. But the morning of May 18th would turn this unassuming mountain into a household name.

Unusual activity began in mid March, when a magnitude 4.2 earthquake rumbled under the mountain and steam started to vent from the summit. By April an ominous bulge appeared on the north flank of the volcano, indicating that the magma chamber beneath was filling quickly.

The final straw came at 8:32 am on the morning of May 18th, when a magnitude 5.1 earthquake shook the volcano. The strained and bulging north side collapsed, sending an estimated 3.7 billion cubic yards of rock hurtling downhill in the largest debris landslide ever recorded. 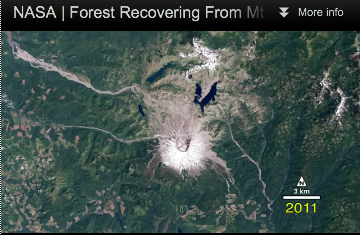 Released from the weight of the overlying rock, the pressurized magma underneath exploded sideways in an unusual lateral eruption. A searing mixture of rock, ash, and gas, called a pyroclastic flow, hurtled down the mountain on the heels of the landslide, reaching speeds of up to 300 miles per hour. In less than 10 minutes, 57 lives were lost and 230 square miles of the surrounding forest were completely destroyed. The eruption lasted for nine hours following the initial explosion, sending a towering plume of smoke and ash more than 15 miles into the atmosphere.

Mount St. Helens was the second volcanic eruption in the lower-48 states this century. The first was the 1915 eruption of Lassen Peak, in northern California. Both volcanoes sit on the Cascadian Volcanic Arc, which is formed by the subduction of the three different tectonic plates.

Though tragic, the 1980 eruption offered ecologists a unique view into the recovery of a forest ecosystem following such a catastrophic disaster.

This article can be found here