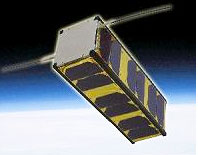 Artistic rendition of the Mayflower microsatellite
[SatNews] There's success revolving around the performance of a test microsatellite...

"Microsatellites are an important part of our future in advancing and maturing technologies," said Paul Meyer, vice president and general manager of advanced programs and technology at Northrop Grumman Aerospace Systems. "We are pleased to be working with Applied Minds to develop the technologies that will make microsatellites successful, and make space mission participation more accessible to nontraditional partners." 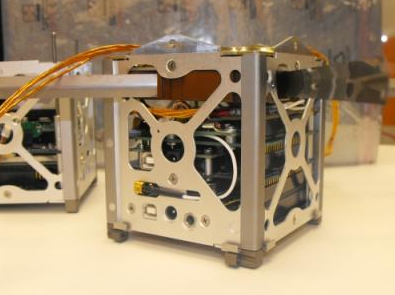 This USC-built cubesat unit is part of Mayflower satellite in Earth orbit. Credit: SERC/CAERUS
The satellite, launched on Dec. 8, 2010, was the first commercial cubesat deployed into orbit by SpaceX. A cubesat is a type of miniaturized spacecraft used for research. Mayflower was launched on a Falcon 9 Dragon test mission and successfully injected into an elliptical orbit approximately 285 kilometers above Earth. The system was designed to test a set of microsatellite components in space. Following standard specifications, microsatellites easily combine with one another onto existing rockets, and only require low development costs, making space mission participation more accessible to those outside the industry. Mayflower and other microsatellites are being jointly developed by Applied Minds and Northrop Grumman, expanding the types of payloads on satellites, and consequently, the types of missions completed by satellites.

Built at Applied Minds in 2010, Mayflower and a payload designed by the University of Southern California were integrated and tested at Northrop Grumman, and then integrated into the Falcon 9 Dragon test mission by California Polytechnic State University, San Luis Obispo. Communications from Mayflower were received at numerous locations around the world and collectively analyzed by NovaWorks, an innovation center for development and operations at Northrop Grumman. Mayflower is serving as the technology development forerunner for other space products at NovaWorks.

"This was an exciting mission for us, and we are proud to be SpaceX's first nongovernment customer," said Danny Hillis, co-founder of Applied Minds. "We hope to launch many more satellites with them in the future." Applied Minds invents, designs, creates and prototypes high technology products and services for a broad range of commercial and government applications including aerospace, transportation, education, architecture, distance collaboration, advanced visualization, electronics and software.