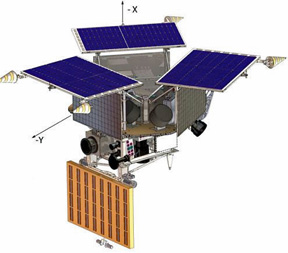 Illustration of Russia's Zond-PP satellite.
[SatNews] In July of last year, a satellite was launched by Russia with the intention of having the spacecraft map the Arctic. However, the Interfax news agency received information from a space industry source that the satellite has stopped functioning. The satellite, Zond-PP, was the initial foray by Russia for a system of five such spacecraft for the mapping of Earth and was to monitor and model Arctic ice floes as well as ocean currents. The satellite was built on the Karat (MKA-FKI) platform and packed a 35kg. l-band UHF panoramic radiometer, a multi-spectral camera, a hyper-spectrometer, and twin video cameras.

This is yet another in a string of Russian satellite failures which have been blamed by the country on sliced budgets and "brain drain." It is hoped a current influx of spending by Russia will halt such embarrassing news, with a new focus on Earth observation and space exploration and away from manned flight missions.

The reason given for the failure of Zond-PP was that of a technical malfunction. Work will continue on attempting to bring the satellite back online.