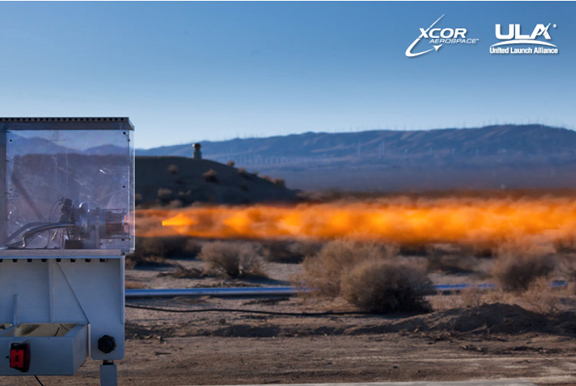 "The first hot fire of any engine is a major milestone but the first firing of a liquid hydrogen engine in our LH2 program is an even bigger accomplishment," said XCOR Chief Executive Officer Jeff Greason. "The hot fire of this engine moves us forward on a path to routine tests and further demonstration of fully reusable, high reliability rocket engines for which we are known."

"XCOR's ability to develop inexpensive, innovative and out-of-the-box solutions to some of the most challenging problems in modern cryogenic rocket engine technology was on display in Mojave," said George Sowers, vice president of Strategic Architecture at ULA. "It was a great first set of engine runs and we look forward to seeing the engine and XCOR's unique piston pumps integrated together in 2014."

Conceived as a lower-cost, risk-managed approach, the goal of the XCOR/ULA LH2 engine program is to produce and operate a subscale demonstration engine. This demonstrator will enable a future decision to pursue development of a flight-ready cryogenic upper-stage engine in the 25,000 lbf thrust class. The technology has significant growth potential due to its unique thermodynamic cycle and piston pump. The larger thrust XCOR XR-8H21 LH2 engine should cost significantly less to produce and be much easier to operate than competing upper stage rocket engine technologies.

XCOR Chief Operating Officer Andrew Nelson said, "I was very impressed with how our team dedicated itself to achieving a task that has not been accomplished in at least a quarter century, maybe more; the development of a new way to do liquid hydrogen rocket engines that fundamentally breaks current cost, reliability and operational models. Even more than that, it will be the first piston-pump-fed LH2 rocket engine anywhere."

The 5H25 engine is intended as a testbed, but could also be suitable for future in-space use on upper stages, earth departure stages, landers, and probes. Nelson added, "This is a significant leap forward in the hope to deliver yet another line of innovation and business to XCOR. And it is only taking place right here."