[SatNews] The ASTRA 2E satellite, designed and manufactured for satellite operator SES by Astrium, Europe’s leading space technology company, has begun its journey to space. The satellite left Astrium’s facility in Toulouse, France, after completion of its final integration and test campaign and is now en route to Baikonur, Kazakhstan, in preparation for its launch on a Proton vehicle. 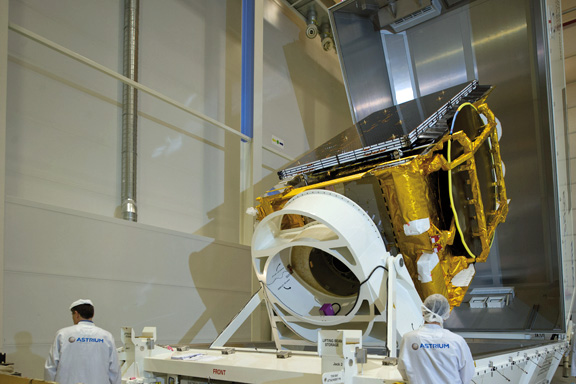 Based on Astrium’s Eurostar E3000 platform, ASTRA 2E will carry Ku-and Ka-band payloads and will enable the delivery of next generation broadcast and broadband services in Europe, Middle East and Africa at the prime orbital location of 28.2 degrees East. ASTRA 2E will have a launch mass of 6 tons and a wingspan of 40m, once its solar arrays are deployed in orbit. The spacecraft will also have the power of 13kW at the end of its 15-year design lifetime. Launch and Early Orbit Phase operations will be conducted from the Astrium spacecraft control centre in Toulouse.

ASTRA 2E will be the seventh Eurostar satellite in the SES fleet, following the successful launch of SES-6 in June 2013 and ASTRA 2F in September 2012. Two more Eurostar E3000 for SES (ASTRA 5B and ASTRA 2G) are currently in final integration and tests in Astrium facilities.