Alliant Techsystems (ATK)... All Fired Up Over Ares I (Testing) 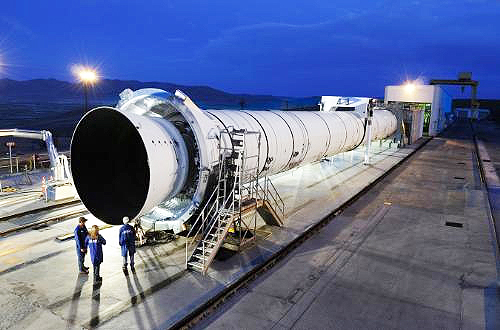 Roaring test is planned for the world's largest solid rocket motor at ATK.
[SatNews] Engineers and technicians at Alliant Techsystems (NYSE: ATK) and NASA have completed installation work on the second Ares I First Stage five-segment Development Motor (DM-2), in preparation for its static-fire, which is currently scheduled for early September. The Ares I First Stage is the largest solid rocket motor ever built.

The engine was designed to maximize astronaut safety while providing the nation with a reliable launch capability for both crew and cargo missions. As the prime contractor, ATK continues to perform on schedule and cost in support of NASA's space exploration programs. The motor, which is 154 feet in length and 12 feet in diameter, has been installed horizontally in a specialized test stand in Utah. Results from this test will be compared with data from the ground test of the first five-segment motor and Ares I-X test flight both successfully completed last year. Although the five-segment motor is based on the design heritage of the flight-proven Solid Rocket Boosters on the Space Shuttle Program, it was upgraded using modern technologies and materials. These include the addition of a fifth segment, changes to the propellant grain, a larger nozzle opening and upgraded insulation and liner.

ATK technicians are in the process of instrumenting the five-segment rocket with sensors and gages to collect measurements on more than 750 data channels. This information will be used to evaluate performance, roll control, acoustics, motor vibrations, oscillations, nozzle modifications and insulation upgrades. The full-scale motor test will advance the safety, technology and knowledge of solid rocket motors. When fired, the motor will produce 3.6 million pounds of maximum thrust or 22 million horsepower. Utilizing the in-line configuration with a single five-segment solid rocket motor first stage and liquid upper stage, this launch vehicle is designed to lift more than 54,000 pounds of payload directly to Low Earth Orbit.

The DM-2 ground test will validate numerous design improvements to the insulation, liner, propellant and nozzle systems. Side load data will also be provided that can be used in future test flights leading to heavy lift development. Additionally, roll torque data will be compared to information collected from the stable flight of Ares I-X to further the design of the roll control system. The first stage is designed to be recovered and reused. This enables NASA and ATK to collect vital post-flight information and performance data, confirming a safe and robust design.