South Africa... The Quiet Side Of Cellular Antennas (Comms)

[SatNews] Rudolph Miller of mybroadband.com reports that two South Africans have given their home country a boost with its Square Kilometer Array (SKA) bid...

The two have invented cellular antenna technology which reduces ‘noisy’ emissions from cellular base stations in the area. South Africa has been short-listed, along with Australia, to host the SKA, a partnership of 67 organizations in 20 countries that will ultimately produce the world’s largest radio telescope. The SKA is projected to be 50 to 100 times more sensitive than any other radio telescope ever built, and an area without much radio emissions is essential for the success of the project.

To protect and improve the low levels of RF interference, a large part of the Northern Cape Province is protected as a radio-astronomy reserve by the South African Astronomy Geographic Advantage Act. Notwithstanding the general low levels of RF interference at the proposed SKA core site, a number of strong RF signals can still be measured in this area. Some of these are due to GSM cellular base stations. The GSM signals are strong enough to potentially block the receivers of the radio telescopes, and the SKA Project Office approached Vodacom in 2006 to reduce these signal levels. 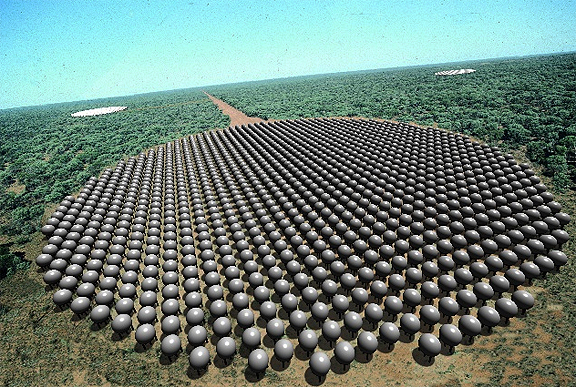 Dr. Gordon Mayhew-Ridgers and Paul van Jaarsveld were tasked to come up with a solution to the problem. Mayhew-Ridgers and van Jaarsveld looked at a range of options, but settled on developing their own antenna technology to solve the problem. The solution was an antenna based on phased-array principles, providing omnidirectional coverage but also blocking the RF transmissions along a single direction (that would correspond with the bearing of the SKA core site). “The antenna has since been tested in the Karoo and performs extremely well. Trialling measurements have shown that the RF signal levels at the proposed SKA core site can be reduced significantly, while at the same time, much of the original GSM coverage can be retained,” Vodacom said. The first production unit is currently being manufactured and should soon be installed on a permanent basis.