India... No To Unauthorized SatPhones (SATCOM)

[SatNews] The government of India has threatened to penalize anyone using satellite phones in the country without necessary authorization. 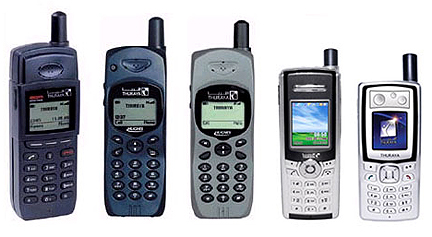 Thuraya satellite phones
On Monday, it issued a warning to traders and visitors to the country against transporting or using satellite phones. A statement issued by the Indian Consulate in Dubai on behalf of the Indian government said, as per the Indian Telegraph Act and existing guidelines, Thuraya Satellite set phone service is not permitted in India and anyone using any telegraphic devices, including Satphone, violates section four of the Indian Telegraph Act, 1885, and the person can be can be penalised. The directive comes a day after India gave Internet telephony pioneer Skype and the makers of BlackBerry handsets a deadline to fall in line with strict security-monitoring regulations.

According to a report in Economic Times, India’s intelligence officials have long complained that they are unable to decipher encrypted data sent on BlackBerry handsets, made by Canadian firm Research in Motion, or intercept calls on Skype. The government has threatened to ban or block BlackBerry and Skype services if the companies fail to adhere to a 15-day deadline to make data available in formats that can be monitored. India has also in the past accused militant movements of using satellite telephones for communications.

To that end, police in Verna registered an offence against a Russian national Bajichtnha Lietpobha alias Valentina, 63, a resident of Moscow, on charges of possessing a satellite phone 'Thuraya' which is banned in India. Police sources said that the accused was found to be using the satellite phone between December 22 and December 31, 2011, at a resort in Arossim where she was residing. While the satellite phone has been seized by the police, the Russian national has been booked under Section 6 of the Indian Wireless Telegraphy Act and Section 20 of the Indian Telegraph Act, 1885. The Times of India had, on Monday, reported that the accused was taken into custody for interrogation by the IB personnel, following a raid on the resort on the night of December 31, with the help of the Verna police. The signals emitted from the satellite phone were tracked to the Arossim resort, following which the raid was conducted and the foreigner nabbed.