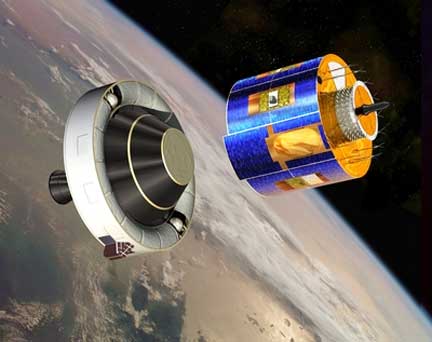 Meteosat Second Generation (MSG), Europe's latest weather satellite, operates in geostationary orbit at 0° Longitude over the West coast of Africa, from where it continuously scans the same quarter of the globe, showing the development and progression of weather systems and providing valuable data for Numerical Weather Prediction and climate monitoring. Credits: ESA/D. Ducros
[SatNews] On July 16th, at 14:00 local time, following the successful launch of the satellite on July 5th aboard...

...an Ariane 5 from Europe’s Spaceport in French Guiana, and after 11 days of LEOP (Launch and Early Orbit Phase) by ESA’s Centre, ESOC, EUMETSAT took control of the MSG-3 satellite operations. During the last 11 days, the satellite was moved into geostationary orbit, the various components which make up the satellite’s platform were activated and their functionality checked. This included a number of critical manoeuvres like the firing of the apogee motors, the change of spacecraft orientation and the unlocking of the SEVIRI scan mirror.

After the successful handover, EUMETSAT can now begin commissioning the satellite and its sensors. Commissioning consists of a two-month phase for satellite check-out and assessment, followed by a four-month phase for imaging and product testing, including calibration and validation activities. The release of the first image generated by the SEVIRI imager on board MSG-3 on August 6th will be an important milestone.