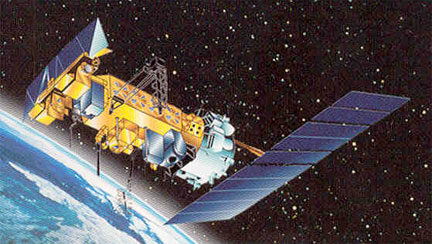 Artistic rendition of the NOAA-17 satellite, courtesy of NOAA.
[SatNews] After nearly 11 years of helping the National Oceanic and Atmospheric Administration (NOAA) predict weather and climate patterns and save lives in search and rescue operations, NOAA has revealed...

...it has turned off the NOAA-17 Polar-Orbiting Environmental Satellite (POES). It was one of NOAA's longest operating spacecraft, which have a typical lifespan of three years. The shutdown will result in no data gap, as NOAA-17 was being used as a back-up satellite and was removed from service after several key systems on board became inoperable.

NOAA initiated the deactivation process of NOAA-17 on February 18, with the final shut down occurring on April 10th. Launched in June 2002, NOAA-17 made 55,000 orbits of the globe, traveling more than 1.5 billion miles while collecting huge amounts of valuable temperature, moisture and image data.

NOAA-17 was part of the international Search and Rescue Satellite-Aided Tracking (SARSAT) network of satellites. SARSAT, which began in 1982, has rescued more than 33,000 people worldwide, including more than 7,000 in the United States and its surrounding waters by detecting distress signals from emergency beacons. Deactivating NOAA-17 also heralds a significant change for polar-orbiting satellite operations worldwide with NOAA now exclusively flying afternoon orbit spacecraft while its key international partner, the European Organisation for the Exploitation of Meteorological Satellites (EUMETSAT), flies mid-morning orbit spacecraft. This results in significant savings for U.S. taxpayers, because sharing data helps produce more accurate and uniform data for forecasters. Through the Initial Joint Polar System agreement, NOAA and EUMETSAT established a shared satellite system by exchanging instruments and coordinating the operations of their polar-orbiting satellites to provide operational meteorological and environmental forecasting and global climate monitoring services worldwide.

NOAA and its partners at the National Aeronautics and Space Administration (NASA) are continuing to build the next generation of polar-orbiting satellites, the Joint Polar Satellite System (JPSS), which is scheduled to launch the JPSS-1 satellite in 2017.