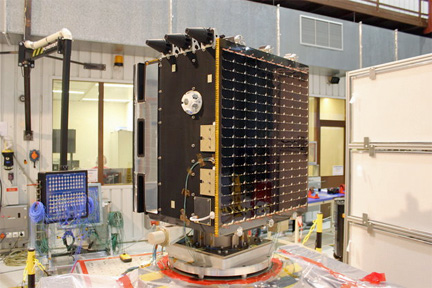 Proba-V Flight Model undergoing vibration testing at Intespace in Toulouse during January 2013. The satellite has been placed on a shaker table to reproduce the heavy vibrations experienced during launch. ESA’s Proba-V microsatellite is designed to chart global vegetation every two days.
Photo courtesy of QinetiQ Space.

[SatNews] Earth watcher Proba-V is in good health following its launch last week. The Vegetation imager has been switched on and the first image has been captured over western France. The miniature satellite is designed to map land cover and vegetation growth across the entire planet every two days. The data can be used for alerting authorities to crop failures or monitoring the spread of deserts and deforestation.

The satellite’s vegetation imager was switched on Wednesday in time to get a glimpse of France’s coast along the Bay of Biscay and the lush interior. The data were then sent down to ESA’s Redu centre in Belgium.

Launched by a Vega rocket from French Guiana in the early hours of May 7th by Arianespace, along with two other satellites, Proba-V was the first of the three passengers to be deployed into its Sun-synchronous near-polar orbit at 820 km altitude, just 55 minutes after launch. The effort to bring the minisatellite to life began immediately—known as the Launch and Early Operations Phase, or LEOP, overseen from Redu, where the satellite is controlled from and monitored during its mission.

“The first LEOP milestone was to check the first signs of life from the satellite as it flew over the ESA ground station at Kourou 40 minutes after separation,” said Karim Mellab, Proba-V Project Manager. “Then a full telemetry session confirmed the stabilisation of the satellite’s attitude, or pointing direction. The onboard computer used ‘magnetorquers—basically magnets interacting with Earth’s magnetic field—to control the satellite’s attitude and compensate for the spin imparted by the separation. “Since then, we have been checking the various subsystems one by one, confirming that they have made it through the stress of launch in working order. These initial checks are now being followed by a diligent commissioning of every single detail of the overall system platform, instrument and technology demonstration payloads, which will take the next few months.”

First raw image from the Proba-V satellite, acquired over France’s west coast on 15 May 2013. The image was generated using the three VNIR bands, blue, red and near-infrared (NIR) superposed, the green being replaced by the NIR. It has not yet been radiometrically or geometrically corrected. Less than a cubic metre in volume, the miniaturised ESA satellite is tasked to map land cover and vegetation growth across the entire planet every two days.
Image courtesy of ESA.

This will include a careful cross-calibration of the Vegetation imager with the previous generation of the instrument, operating aboard France’s Spot-5 satellite, to ensure data compatibility.

Less than a cubic metre in volume, Proba-V is a miniaturized ESA satellite tasked with a full-scale mission: to map land cover and vegetation growth across the entire planet every two days. Proba-V is flying a lighter but fully functional redesign of the Vegetation imaging instruments previously flown aboard France’s full-sized Spot-4 and Spot-5 satellites, which have been observing Earth since 1998.

The minisatellite will provide data to the instrument’s worldwide user community of scientists and service providers as soon as its orbital commissioning—including cross-checks with Spot-5’s Vegetation instrument—is complete and the mission is turned over from ESA’s Directorate of Technical and Quality Management to the Agency’s Earth Observation Programme.