...where he was welcomed by the Group´s Chairperson, Elena Pisonero, Chief Executive Officer Carlos Espinós, members of the Board of Directors, representatives of the management team and staff. 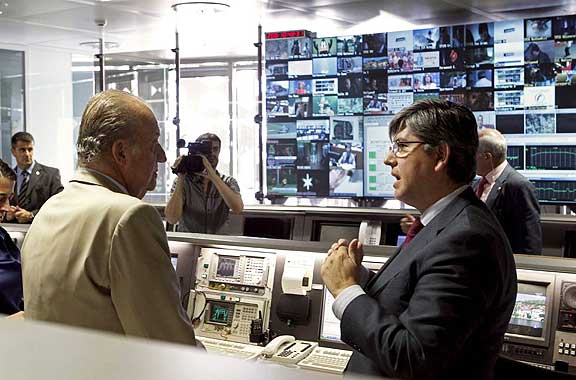 Elena Pisonero welcomed His Majesty and made a brief presentation of the company, highlighting its coverage over Europe, America and North Africa and its presence in Portugal, all of South America, Mexico, the U.S., Israel, Slovenia, Morocco, Algeria, Nigeria, Senegal and Guinea. The company´s internationalization process allowed it to generate 65.6 percent of its income from outside of Spain in 2011. Pisonero indicated that “this year we expect income of over 190 million euros, with a staff of 177 professionals”.

The Chairperson of HISPASAT indicated that, “since its foundation in 1989, HISPASAT has not stopped evolving. Today it is the World´s eighth operator that broadcasts and distributes the most television channels in Spanish and Portuguese”. The company has a fleet of five satellites that, “we hope to double four years from now”, according to its Chairperson who also stated that “total investment for the fleet to 2016 will surpass one billion euros”.

Ms. Pisonero reiterated the three key contributions that HISPASAT makes to the Spanish economy. First, she pointed out that the company “generates important economic returns for the Spanish aerospace and telecommunications industries, contributes to its internationalization”. In addition, she pointed out that “it leads numerous R&D projects” and highlighted the important role that HISPASAT plays in “the development of the connected society to reduce the digital gap”. “Satellite technology”, she stated, “is the only one capable of successfully confronting the universalization of basic communications services in areas where conventional terrestrial networks are not viable”.

Finally, HISPASAT´s Chairperson announced that the company intends to take on new challenges and wants to make a qualitative jump. “We have an ambitious project, and stakeholders and professionals here with us today, are ready to back it”, she concluded.

During his visit, His Majesty could see firsthand how the orbital control of HISPASAT´s satellites is carried out. His Majesty visited the areas from which network operations take place, monitoring signals, detecting interferences and resolving problems; as well as where the telemetry reception takes place (which informs on all the parameters of each satellite) and the sending of telecommands (to control the satellites from Earth), orbit calculation and the planning and execution of orbit operations and tests. The Arganda Control Centre, remodeled in 2010, is the most important of the entire ground network segment of the HISPASAT Group—another three control centres include (Las Palmas de Gran Canaria, Rio de Janeiro and Madrid) and other minor ground stations (Maspalomas, Guaratiba and Mexico). 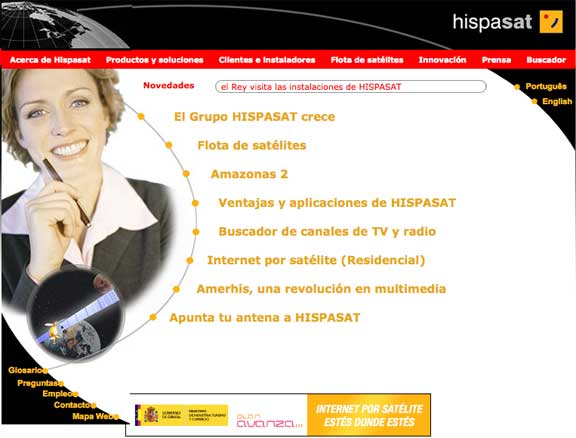