[SatNews] Without fuel, where would a spacecraft find itself? In order to ensure fuel availability, the fuel tank is a crucial component for spaceflight. 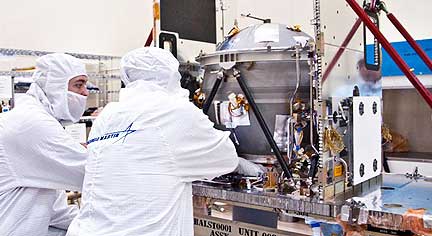 Engineers conduct checks on one of NASA's GRAIL spacecraft in the Space Support Building at Lockheed Martin Space Systems in Denver.
Engineers have conducted a fuel tank check of one of NASA's GRAIL mission spacecraft (Gravity Recovery and Interior Laboratory), scheduled for launch in 2011. Confirming the size and fit of manufactured components is one of the steps required prior to welding the spacecraft's fuel tanks into the propulsion system's feed lines. This image was taken on June 29, 2010, during the propulsion subsystem assembly and integration effort in the Space Support Building clean room at Lockheed Martin Space Systems in Denver. The GRAIL mission will fly twin spacecraft (spacecraft "A" and "B") in tandem orbits around the moon for several months to measure its gravity field in unprecedented detail. The mission will also answer longstanding questions about Earth's moon, and provide scientists a better understanding of how Earth and other rocky planets in the solar system formed.