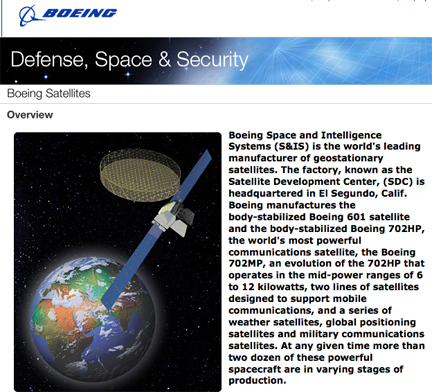 ...at the Satellite 2012 Conference & Exhibition, to be held March 12-15 in Washington. "Since the formation of the satellite business in 1961, and the launch of Syncom, the world's first geosynchronous communications satellite, two years later, our focus has been on delivering the capabilities that meet our customers' missions," said Craig Cooning, CEO, Boeing Satellite Systems International Inc., and vice president and general manager, Boeing Space & Intelligence Systems. "To date, Boeing has accumulated more than 2,900 years of satellite service, and we rely upon our strong legacy as we continue to evolve our products and processes in order to bring affordable and low-risk solutions to our customers."

The Boeing exhibit, located in Booth 625 at the Walter E. Washington Convention Center, will feature displays tracing the company's history and current efforts in satellite innovation, from Syncom to Wideband Global SATCOM and Intelsat. The company is sponsoring the Satellite Executive of the Year luncheon on March 14th. Stephen O'Neill, president of Boeing Satellite Systems International, will deliver the keynote address at the luncheon, which also will include the premiere of a Boeing video on the benefits that satellites bring to the military, industry, and the general public. In addition, Boeing is participating in two panel discussions at Satellite 2012. Jim Simpson, vice president of Business Development, Boeing Space & Intelligence Systems, will participate in the discussion on DOD Procurement Efficiencies in a Budget-Constrained Environment. O’Neill will be part of a panel addressing Satellite Manufacturing: At a Critical Turning Point.