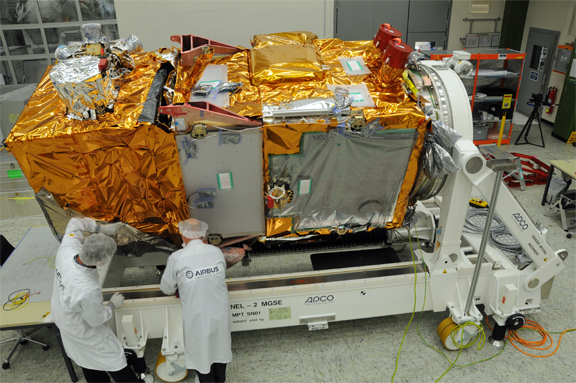 The Sentinel-2A satellite is being loaded at Airbus Defence and Space’s satellite integration center in Friedrichshafen (Germany).

Photo: is courtesy of Airbus DS — A. Ruttloff.

The satellite, which weighs around 1.2 tons, is scheduled to be launched in the first half of 2015. Sentinel-2A is one of the  European “Copernicus” program satellites built under the industrial leadership of  Airbus Defence and Space for the European Space Agency.

In the coming months, the Sentinel-2A satellite will undergo a series of environmental tests at IABG, near Munich, Germany, to determine its suitability for use in space. The Sentinel-2 satellites will deliver optical images from the visible-near infrared to short-wave infrared range of the electromagnetic spectrum using a total of 13 spectral bands with a resolution of 10, 20 or 60 meters and a swath width of 290 km and will be used mainly in the areas of land use, soil sealing, land management, forest monitoring, natural disasters (floods, forest fires, landslides, erosion) and humanitarian aid. 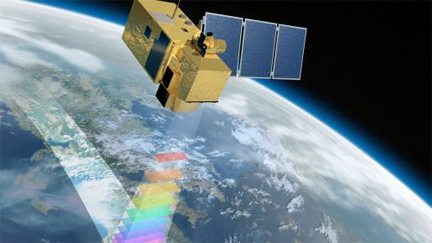 Artistic rendition of a Sentinel satellite.

Image is courtesy of Airbus D&S.

Sentinel-2A is scheduled to launch in 2015; Sentinel-2B, which is identical in design, is set to follow in 2016. Together, these two satellites will be able to capture images of our planet’s entire land surface in just five days in a systematic manner.

Copernicus is a joint undertaking of the European Commission and ESA. It forms an extensive programme that will collect, process and carry out targeted analysis of remote sensing data of the Earth. It aims to continuously collect data on the current state of our “Blue Planet” and to promptly pass this data on to various user groups, including authorities, companies, institutions, environmental agencies and the general public.

Additional information regarding Airbus D&S' Sentinel-2A may be accessed at http://www.space-airbusds.com/en/programme/sentinel-1vh.html