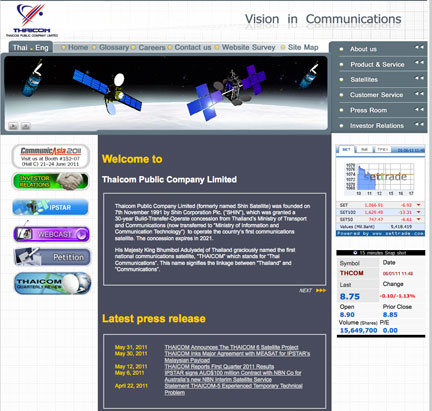 Link to THAICOM's homepage
[SatNews] Approval has now been given for the next phase of this Company's operations in Asia...

THAICOM Public Company Limited (SET INDEX: THCOM) has announced that the Ministry of Information and Communication Technology has approved the THAICOM 6 satellite that was proposed by the Company — the Board of Directors of THAICOM Plc. has also approved the investment in this project, which is worth approximately US$160 million. THAICOM 6 will expand the Company's business in providing satellite services to customers in particular, services for distributing video (broadcasting) such as satellite television. The demand for satellite transponders in the C- and Ku-band frequencies in Southeast Asia, East and South Asia are forecasted to be strong. Thaicom 6 satellite is considered a medium-size, three-axis stabilized satellite similar to Thaicom 5 with the total of 26 channels (or transponders): 18 C-band transponders and 8 Ku-band transponders. It will weigh 3,000 kilograms with a minimum life of 15 years of service. The company will launch the Thaicom 6 into the orbit at 78.5 degrees East and it will co-located with Thaicom 5. The company will start the Thaicom 6 project immediately and is expected to launch the Thaicom 6 satellite into orbit within the second quarter of the year 2013, the construction of which takes approximately two years.

Mr. Arak Chonlatanon, Chief Executive Officer of THAICOM PLC, said, "The Company is pleased to receive approval from the Ministry of ICT to build and launch the THAICOM 6 satellite. The Company is confident that THAICOM 6 will help expand the satellite TV industry in the region and especially in Southeast Asia and South Asia which are showing very strong and rapid growth. The Company will begin marketing the services as soon as possible during the construction of the satellite."