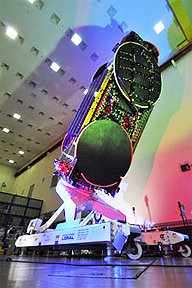 Photo of ViaSat-1 courtesy of SS/L
[SatNews] Having reached its destined orbit after the successful completion of all scheduled maneuvers...

ViaSat Inc. (NASDAQ: VSAT) has announced that their high capacity satellite, ViaSat-1, is now positioned in geosynchronous orbit where it will begin in-orbit testing. Since launching on October 19th, ViaSat-1 has successfully completed all scheduled maneuvers:
On Wednesday, the satellite's payload was switched on, enabling the first high-capacity satellite over North America to begin a series of in-orbit tests. Those tests will be followed by a move to its operational orbital location. The 140 Gbps capacity satellite is scheduled to enter service in late December. At that time, the initial ViaSat-1 service will launch and then services will sequentially expand across the United States over the following months. ViaSat -1 is the second multi-spotbeam satellite to use ViaSat's transformational high-capacity satellite system architecture, following the launch of services on Eutelsat KA-SAT in Europe earlier this year. The satellite was built for ViaSat by Space Systems/Loral and launched by International Launch Services.

ViaSat-1 is designed to transform the economics and quality of service that satellite broadband can provide. The technology is expected to elevate satellite into a much more competitive position in the broadband service marketplace, with the capacity to serve the accelerating growth in bandwidth demand for multimedia Internet access over the next decade. The high-capacity Ka-band spot beam satellite includes coverage over North America and Hawaii, enabling a variety of new, high-speed broadband services for WildBlue in the U.S., Xplornet in Canada, and JetBlue Airways on its domestic U.S. fleet.