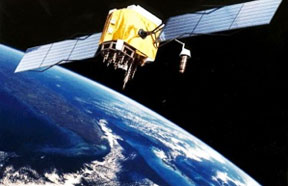 Artistic rendition of the Paz satellite
[SatNews] This could be a real first for a European nation regarding EO...

Spain is on track to become the first European country to have a dual Earth observation system, radar and optical, for both civilian and military use. Defense Minister Carme Chacon said radar technology installed on the satellite, which is totally of Spanish design and manufacture, will enable up to 100 images of the Earth's surface to be taken per day at a resolution of up to 1 yard. In three years' time, this capacity will be joined by that of the Ingenio satellite and its optical technology. "With the Paz and Ingenio satellites, our military will have their own observation systems, thus multiplying our autonomy in terms of obtaining information and better protecting the interests of Spain," she said.

Chacon made her remarks at a formal presentation of the Paz satellite this month. The Paz satellite was ordered from Hisdesat by the Ministry of Defense at the end of 2007 under the National Earth Observation Plan to meet the operational requirements of the Spanish armed forces. Hisdesat contracted the design and manufacture of the satellite to EADS CASA Espacio, meaning this is the first time that the Spanish space industry has undertaken the challenge to build a satellite of this size and complexity to be assembled and manufactured entirely in Spain.

Chacon stressed that the Paz satellite, which will be in orbit in 2013, will be able to detect the position of any ship in the world that could possibly become the victim of hijacking through an automatic AIS identification system. It also will enable the tasks of border control monitoring, the verification of international treaties, the monitoring and assessment of natural disasters and environmental control to be carried out more easily and effectively. "The Paz satellite will multiply the operational capabilities of our armed forces both within and beyond our borders," she said.

Spain's aerospace industry was credited for the innovation that made such progress possible. Hisdesat said the satellite will be launched from Russia near the end of next year. The Paz satellite, which has been designed for a 5 1/2-year mission, measures about 6.5 feet in height and about 3.8 feet in diameter. It has a total weight of nearly 3,100 pounds. Spain's National Institute for Aerospace Technology is responsible for developing the terrestrial aspects of the program, which include control and monitoring stations in Torrejon, near Madrid, and Maspalomas in the Canary Islands, as well as data processing and storage centers.