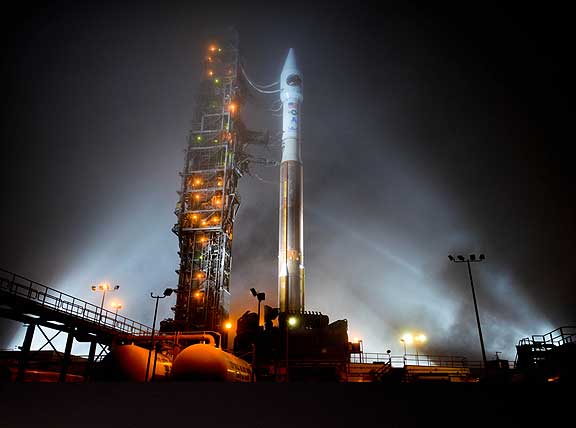 [SatNews] Vandenberg Air Force Base, Calif. (Aug. 2, 2012) – The launch of an Atlas V carrying the National Reconnaissance Office NROL-36 payload has been further delayed to no earlier than...

Tuesday, Aug. 14 to provide additional time for resolution of a range instrumentation issue that developed during the initial launch attempt Aug. 2. There are no issues with the Atlas V vehicle or the NROL-36 space vehicle.

Saturday, August 4 to provide additional time for resolution of a range instrumentation issue that developed during the initial launch attempt August 2. There are no issues with the Atlas V vehicle or the NROL-36 space vehicle. The August 4 launch will proceed pending resolution of the range instrumentation item and the launch window open time is 12:13 a.m. PDT. The forecast for August 4 shows a 90 percent chance of favorable weather conditions for the launch.

The NROL-36 launch will be carried live beginning 20 minutes prior to launch and will conclude approximately five minutes following launch. A simulcast of the broadcast can be viewed here. 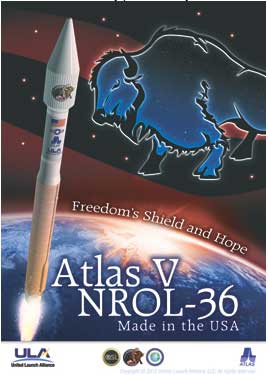 
The NROL-36 mission will be launched for the National Reconnaissance Office in support of national defense. In addition to the NROL-36 mission, the launch also will deliver 11 smaller auxilary payloads or "cubesats" to space.

The cubesats were developed under the sponsorship of the NRO and NSA by the Space and Missile Command, the Aerospace Corporatio, University of Southern California, University of Colorado, Cal Poly, Morehead State University, University of California-Berkley and the Lawrence Livermore National Lab. The cubesat missions will study space weather and communication, space environment, debris mitigation, maritime shipping container tracking and spaceflight safety and orbit refinement.