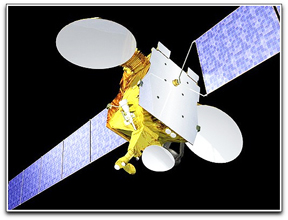 The BADR-6 satellite, built by EADS Astrium, has been handed over to ARABSAT as part of the in-orbit delivery contract. The satellite has now entered commercial service. BADR-6 is the third spacecraft built by Astrium for ARABSAT, the communications satellite operator based in Riyadh, Saudi Arabia. The Astrium control center in Toulouse started BADR-6 satellite operations following its launch by an Ariane 5 on the night of July 7th, 2008. The satellite arrived in geostationary orbit on July 12th, where it was comprehensively tested to ensure all spacecraft functions were performing as expected. ARABSAT officially took possession of the operational satellite on August 8th, one month after the launch. Astrium Satellites is prime contractor for the satellite and responsible for the Launch and Early Orbit Phase (LEOP) operations as part of the in-orbit delivery contract. The BADR-6 satellite is a Eurostar E2000+ model with a launch mass of 3,350 kg. The satellite's payload features 24 transponders in C-band and 20 transponders in Ku-band and is the 36th Eurostar to enter operational service in orbit.
Topical Tags :
New Products
Satellite Operator
Service Provider