[SatNews] A comet is responsible...

In a celestial forensic exercise, scientists analyzing data from NASA's Cassini, Galileo and New Horizons missions have traced telltale ripples in Saturn and Jupiter's rings to specific collisions with cometary fragments that occurred decades, not millions of years, ago. Jupiter's ripple-producing culprit was comet Shoemaker-Levy 9. The comet's debris cloud hurtled through the thin Jupiter ring system on a collision course into the planet in July 1994. Scientists attribute Saturn's ripples to a similar object - likely another cloud of comet debris - plunging through the inner rings in 1983. The findings are detailed in two papers published Thursday in the journal Science. "We're finding evidence that a planet's rings can be affected by specific, traceable events that happened in the last 30 years, rather than a hundred million years ago," said Matthew Hedman, a Cassini imaging team associate, lead author on one of the papers, and a research associate at Cornell University in Ithaca, N.Y. "The solar system is a much more dynamic place than we gave it credit for." 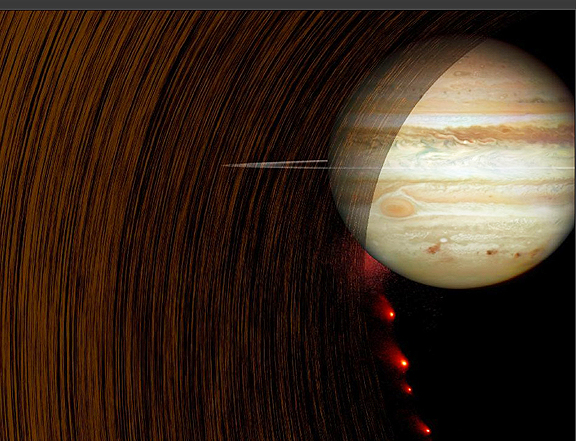 Comet Impact Into Jupiter — This artist's concept shows comet Shoemaker-Levy 9 heading into Jupiter in July 1994, while its dust cloud creates a rippling wake in Jupiter's ring. The comet, as imaged by NASA's Hubble Space Telescope, appears as a string of reddish fragments falling into Jupiter from the south. A later Hubble image shows the dark blotches where pieces of the comet had already collided with the planet. The faint ring, based on images obtained by NASA's Galileo mission, is normally very faint, but has been enhanced for this illustration. The streaks show the tracks of the comet's dust cloud. Impacts from these dust particles tilted the ring off its axis. Image credit: copyright M. Showalter 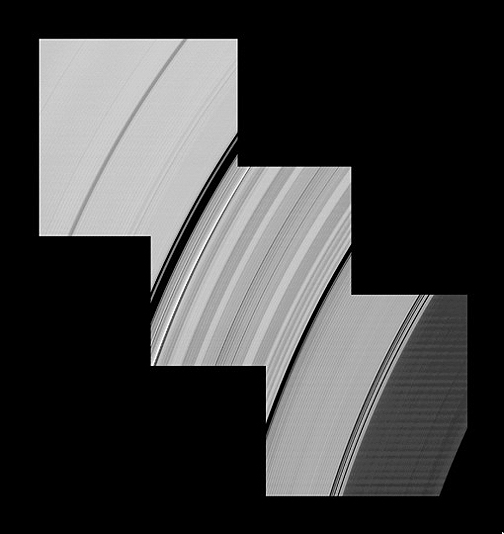 Alternating light and dark bands, extending a great distance across Saturn's D and C rings, are shown here in these Cassini images taken one month before the planet's August 2009 equinox. The C ring stretches across the upper left and middle of the image. The D ring is barely visible amid the noise in the lower right of the image. 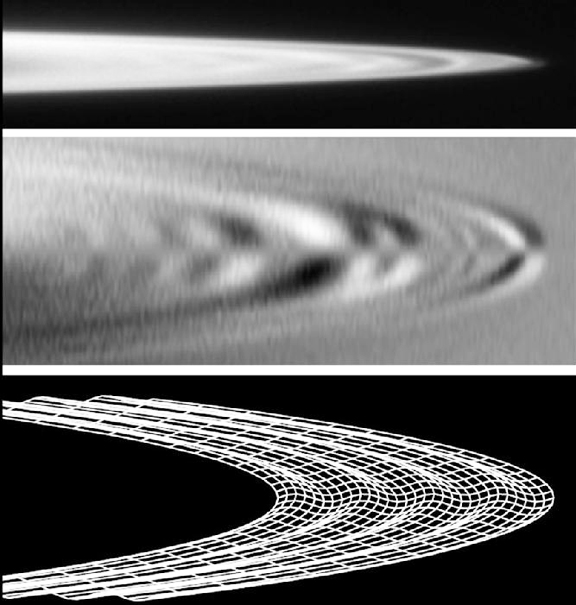 Subtle Ripples in Jupiter's Ring — These images, derived from data obtained by NASA's Galileo spacecraft, show the subtle ripples in the ring of Jupiter that scientists have been able to trace back to the impact of comet Shoemaker-Levy 9 in July 1994. The top image was obtained by Galileo on Nov. 9, 1996, and shows the tip of the Jovian ring. The middle image is a version of the same image that has been computer-enhanced to show the ripples. The third image shows a computer model derived from the data. The Jet Propulsion Laboratory, a division of the California Institute of Technology in Pasadena, managed the Galileo mission for NASA. Image credit: NASA/JPL-Caltech/SETI
Scientists learned about the patchy patterns in Jupiter's rings in the late 1990s from Galileo's visit to Jupiter. Unfortunately, the images from that mission were fuzzy, and scientists didn't understand why such patterns would occur. Not until Cassini entered orbit around Saturn in 2004 and started sending back thousands of images did scientists have a better picture of the activity. A 2007 science paper by Hedman and colleagues first noted corrugations in Saturn's innermost ring, dubbed the D ring. A group, including Hedman and Mark Showalter, a Cassini co-investigator based at the SETI Institute in Mountain View, Calif., saw that the grooves in the D ring appeared to wind together more tightly over time. Playing the process backward, Hedman demonstrated the pattern originated when something tilted the D ring off its axis by about 300 feet (100 meters) in late 1983. The scientists found Saturn's gravity on the tilted area warped the ring into a tightening spiral. Cassini imaging scientists received another clue around August 2009 when the sun shone directly along Saturn's equator and lit the rings edge-on. The unique lighting conditions highlighted ripples not previously seen in another part of the ring system. Whatever happened in 1983 was big - not a small, localized event.

The collision tilted a region more than 12,000 miles (19,000 kilometers) wide, covering part of the D ring and the next outermost ring, called the C ring. Unfortunately, spacecraft were not visiting Saturn at that time, and the planet was on the far side of the sun out of sight from ground or space-based telescopes. Hedman and Showalter, the lead author on the second paper, wondered whether the long-forgotten pattern in Jupiter's ring system might illuminate the mystery. Using Galileo images from 1996 and 2000, Showalter confirmed a similar winding spiral pattern by applying the same math they had applied to Saturn and factoring in Jupiter's gravitational influence. Galileo was launched on a space shuttle in 1989 and studied Jupiter until 2003. Unwinding the spiral pinpointed the date when Jupiter's ring was tilted off its axis between June and September 1994. Shoemaker-Levy plunged into the Jovian atmosphere in late July. The Galileo images also revealed a second spiral, which was calculated to have originated in 1990. Images taken by New Horizons in 2007, when the spacecraft flew by Jupiter on its way to Pluto, showed two newer ripple patterns, in addition to the fading echo of the Shoemaker-Levy impact. Launched in Oct. 15, 1997, Cassini began orbiting Saturn in 2004 and sends back data daily.