At RFE/RL's Radio Farda, the e-mails and phone calls come in continuously from Iran. 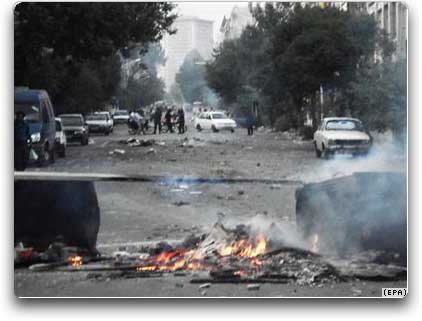 "It's really important that Radio Farda send reports every moment to us, because we do not have any access to news inside Iran," says one listener in Tehran. "Now the VOA and BBC have been jammed." Iranians are increasingly cut off from non-official sources of news on the ongoing protests against the reelection of President Mahmud Ahmadinejad.

The listeners are helping the U.S. Congress-funded Radio Farda, which broadcasts 24 hours a day in Persian from Prague, to play an escalating cat-and-mouse game with Iranian government censors.

The censors have been trying to black out both U.S. and British government-sponsored newscasts in Persian almost from the moment a week ago that people began protesting the July 12 presidential election results.

To black out a newscast, Iranian authorities beam their own signal up to the commercial satellite carrying the foreign program. The beam is on the same frequency as the newscast, only at much higher power. As a result, anyone in Iran trying to receive the newscast on their home satellite dish receives only the meaningless, substitute signal instead.

Similarly, the government is blacking out foreign news programming in Persian on shortwave and medium-wave radio, particularly within major population centers. Here, authorities set up a local high-power transmitter to again overwhelm the newscast with a stronger signal on the same frequency.

Iranian officials are aiming most at broadcasts during the peak evening listening hours. And it is during these hours that the feedback from the news program's audience in Tehran grows most frenzied.

Iran has blocked not only opposition and news websites, but social networks like Facebook as well. Many listeners simply send messages noting their location and that they can no longer hear the program. That alerts the broadcasters to the moment the programming is blocked. The trick for the broadcasters then becomes to shift the transmission signal slightly to escape the blackout.

During the time it takes the censors to catch up and similarly shift their substitute signal, the programming can be received by listeners searching their dials.

As the game has escalated, foreign broadcasters have dramatically increased the number of satellites and short wave frequencies carrying their programs.

It is the kind of struggle once common during the Cold War. For decades, the Soviet government spent huge amounts of money to isolate its citizenry from outside news sources.

But it's not something seen often since then. Iran has periodically blocked U.S. broadcasting at critical moments — including the student demonstrations of 1999 and the last presidential election in 2005 — but never with such a sustained effort as now.

Iran's activity raises some legal questions, because the jamming is also knocking out some transmissions to countries other than Iran itself.

The BBC says its Arabic-language service and other language services to the Middle East have also experienced transmission problems since the jamming of its Persian-language frequency began June 14.

Rod Kirwan, a communications law and regulation expert at the international law firm Denton Wilde Sapte in London, says that Iran has the right under international telecommunications treaties to control the use of the broadcast spectrum within its territory, including foreign satellite broadcasting.

But when there is a spillover effect into neighboring countries, it is creating a harmful interference with the same rights of other member states in the International Telecommunications Union (ITU).

Kirwan says that while the broadcast spectrum is a "sovereign right," it's up to each country "to decide how to best use the spectrum and, of course, nations have decided for the greater good to sign up to the ITU coordination arrangements in order that everything works and you have smooth international services."

But Kirwan adds that this "is a sort of voluntary restriction on your freedom to act as a sovereign body and that is the tension: national rights over sovereign territory or spectrum vs. international coordination rights."

Kirwan says that if other states complain, the case could become an escalating dispute. But it is not likely to result in clear penalties for Iran.

"It's one of the basic problems with public international law: who is around to enforce it? And, of course, there is nobody and so it ends in some kind of diplomacy and maybe bilateral pressure," Kirwan says. "But essentially these international treaty organizations operate on a voluntary basis."

That makes jamming the foreign broadcasts a fairly cost-free political strategy for Iran. It is also not particularly expensive in financial terms. It only requires uplink equipment to reach the target satellite and the patience and manpower to play the cat-and-mouse game of shifting frequencies that follows.

Overall, the jamming effort falls into Tehran's larger goal of blocking out all key communications links that challenge the legitimacy of the presidential election results.

The government is blocking many international websites, including Facebook and Twitter, as well as local opposition sites. Text messaging has been cut off for the past week, and mobile-phone service in Tehran is frequently down.

No wonder, then that some of the messages Radio Farda receives from listeners sound like an SOS to the outside world from an increasingly cut-off populace.

"Today is Sunday, June 21. All sites, radios, and anything from which we could get true information have been jammed and now we can't get any news," one caller says.

"Now you need to show your higher technology. We are waiting to see whether you are able to overcome these parasites or not."

Iran's supreme leader, Ayatollah Ali Khamenei, has accused international media of waging a "psychological war" against the country. It's a charge that millions of Iranians now can make against Khamenei himself.

of Radio Free Europe
Radio Liberty
The original article may be read at this direct link.